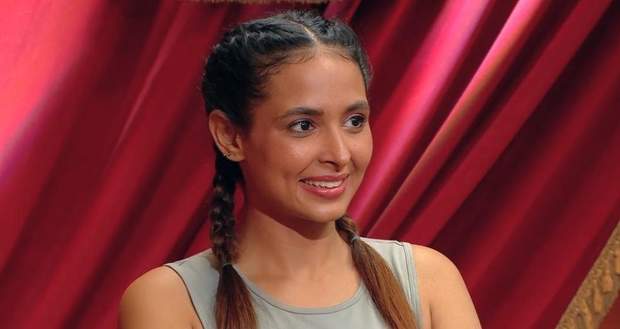 Today's Swayamvar Mika Di Vohti 1st July 2022 episode starts with Shaan asking Mika who will he give the next Kangan to.

Neet knows that it will go to Riya. However, in order to give his next Kangan, Mika needs to take one back from Busra.

Riya then gets a chance to go on a solo date with Mika and she thanks him for giving her a chance despite being a wild card entry.

The next day, Shaan has a surprise for all the girls as Geeta Phogat is coming on Mika Di Vohti.

Mika reveals that he looks up to Geeta because there are very few individuals of have made India proud.

In between the conversation, the girls get to know that even Mika’s mother was a Kabaddi player back in the day.

The game of Kabaddi begins with Mika selecting Busra and Manpreet as two team captains.

Geeta Phogat encourages both the captains to choose their teammates.

Manpreet becomes very happy that Busra did not select Chandrani for her team because Chandrani has been a kabaddi player in her school days.

Later, Chandrani also reveals that her mother and sister have been top-level kabaddi players and she will try to follow their example today and play for Mika.

A referee is called who instructs the girls about the rules and Shaan playfully asks him whether instead of Kabaddi, Kabaddi, can the girls say, Mika, Mika.

The referee says yes and the game begins.

Team Chingara wins at the end and gets to go on a date with Mika.

Later, Geeta Phogat demonstrates self-defense techniques to all the girls with the help of Prantika and Chandrika.

However, Geeta gets impressed by Chandrani the most.

For the date, Mika along with the girls spends time near the Chhatris in Udaipur made by Raja Maan Singh for his queens.

Dhwani shares she got bullied due to her skin colour

The girls share how they are feeling with Mika but Dhwani shares a little memory of her childhood.

Her eyes tear a bit when she informs Mika how people used to bully her due to her dusky skin colour.

Mika then tells every girl that they should not take criticism to their heart because they are bound to encounter mean people in every field.

Giving his own life example, Mika says that people used to make fun of him and still troll him but their hate only makes one stronger.

Dhwani then performs a poem she wrote for Mika that makes Mika hug her.

The girls play a fun game with Mika

To add a fun element to the game, Manpreet blindfolds Mika and asks him to feel girls’ hands and recognize them.

However, it is only Manpreet’s hand that Mika is not able to recognize and this makes Dhwani chuckle.

© Copyright tellybest.com, 2020, 2021. All Rights Reserved. Unauthorized use and/or duplication of any material from tellybest.com without written permission is strictly prohibited.
Cached Saved on: Saturday 1st of October 2022 12:04:52 AM