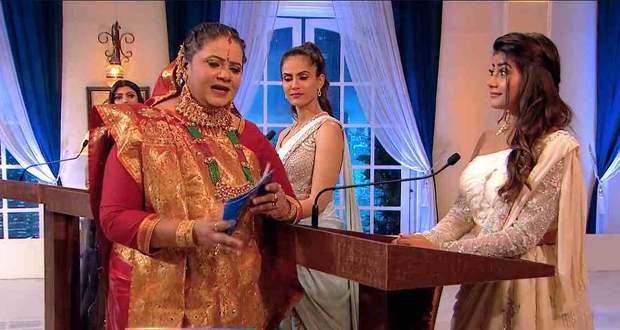 Rupal Patel is a celebrated personality on Hindi TV, known for her roles in serials like Saath Nibhana Saathiya.

The top four princesses gather together with Mika and Shaan welcoming Rupal Patel.

Rupal Patel says she is here to ask questions that viewers want to ask the girls.

She asks Mika if he is doing this Swayam Var to fetch attention or not.

Mika denies this and says he is actually interested in knowing these girls because he wants to settle in his life too.

The next burning question asked by Rupal is about Mika's past relationships being very brief.

Mika says he never committed to anyone for a lifetime but this time, he does want to get married.

The third claim put forth by Rupal against Mika is him listening to his heart, and not bothering about what others might think of him.

Mika agrees with this claim and says that is why he wants a bride to balance him out.

Akanksha Puri is next in line to be questioned by Rupal and the first question is about Akanksha’s intentions entering Mika Di Vohti as a wildcard despite being his friend.

Akanksha reveals she has taken Mika for granted and wants to get closer to him as a romantic partner now.

The second question aimed at Akanksha is whether she has entered Mika Di Vohti to boost her own career or not.

Akanksha denies this. The next princess to be grilled by Rupal Patel is Riya.

Rupal immediately asks Riya about her inability to stick to one decision revolving around her ex-boyfriend whom she took home to meet with her parents.

Riya reveals she did not settle down with him because her family did not like him.

Rupal also asks Riya if she is here to get famous or not.

Riya denies this completely and says she has a lot more followers compared to other girls participating in Mika Di Vohti.

The next princess to be questioned thoroughly by Rupal is Neet.

Rupal asks Neet to describe three qualities that other girls did not see in Mika.

Neet hesitates and becomes nervous, making Akanksha say that her confidence for the very first time wavered a bit.

The next and the last princess out of the top four is Prantika.

Rupal asks Prantika why she sings all the time in front of Mika and whether she is here to boost her singing career or not.

Prantika says she sings because music means a lot to Mika and she wants to be able to attract him to her.

Mika smiles and calls Prantika intelligent, instead of clever.

Later, the eliminated contestants of Mika Di Vohti appear and are asked questions by Mika about the girl he should marry.

Neet and Akanksha are the most voted girls by the ex-girls to become wives of Mika Singh.

However, Prantika gets hurt when the other ex-girls call her fake and bogus.

In the elimination round, Akanksha Puri and Neet get saved first.

Prantika gets nervous about whether Mika still trusts her the same way or not.

However, Prantika’s happiness knows no bounds when Mika reveals she is still safe and can stay in Mika Di Vohti.

Riya gets eliminated at the end.

© Copyright tellybest.com, 2022, 2023. All Rights Reserved. Unauthorized use and/or duplication of any material from tellybest.com without written permission is strictly prohibited.
Cached Saved on: Wednesday 25th of January 2023 12:26:41 PMCached Disp on: Sunday 5th of February 2023 12:10:53 PM