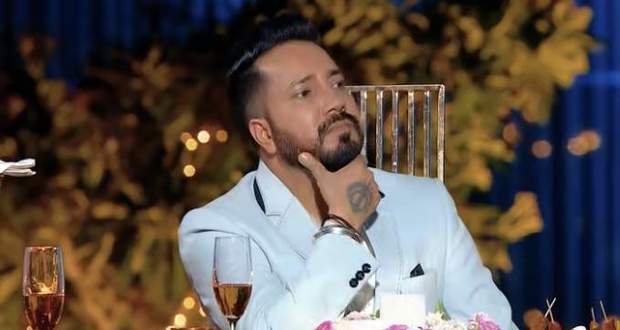 Who will win the second bangle?

Mika starts by complimenting Neet separately on how good she looks.

Nisha sings ‘Jhumka Jhulaniya Haar’ for Mika to express her feelings for him.

Neet says that there is something different about Punjabi girls and she doesn’t consider anyone else her competition.

Busra contradicts and says that Neet thinks that Mika is a trophy she can win.

They exchange looks and there are sparks of a clash between them.

Mika says he’ll give the bangle to Prantika because he likes her child-like innocence.

Who will get eliminated?

Shaan tells the remaining girls that some of them will be eliminated today.

The first person to get eliminated was Nisha.

Second, to leave is Reshma and the third is Pratiksha.

The last one to get eliminated is Poonam.

All of them leave the room and the show as well.

Mika’s first date with the girls

Mika goes on a date with Busra and Prantika.

He compliments both the girls on how they look.

Mika and Busra look into each other’s eyes but Prantika does not like this closeness between them.

Busra says she feels a separate connection with Mika and says that they’re both very similar and starts singing to impress him.

Seeing this, Prantika sings for him too and gets close to him.

They both start dancing and Busra gets jealous saying Prantika stole the song she had planned to sing before.

Prantika and Mika drink wine while locking arms with each other.

To retaliate, Busra dances with Mika and Prantika gets jealous seeing that.

Mika thanks both of them for coming to the date and says he had a good time.

The next day, Shaan welcomes a new tv guest Divyaka Tripathi to the show.

She suggests a new idea of speed dating to spice things up.

The idea is that Mika will be playing snooker and the other girls will come to impress him.

If Divyanka gets bored of the conversation, she can press the buzzer to change the girl.

Chandrani is the first to walk in and says she’s shy to talk and wants Mika to ask her about herself.

They talk and get to know each other better, while she keeps blushing.

Neet enters after her and pretends to not know how to play snooker even though she does.

They hold hands and the conversation gets intense and intimate.

Divyanka warns Neet that the conversation is getting boring and presses the buzzer.