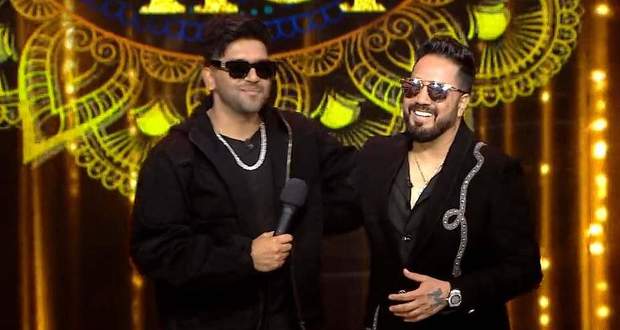 All the three princesses enter with their amazing attires.

Neet Mahal is wearing a modern-day glittery blue mix of Kurti and Palazzo whereas Prantika is wearing a pink saree with a plunging blouse.

Shaan then welcomes Guru Randhawa on the stage while Mika hugs Guru and thanks him for coming to Mika Di Vohti.

Guru reveals he is still not sure about Mika’s wedding and he will only believe him to be married once he sees Mika marry one of the girls.

Mika introduces Guru to all the three princesses.

Guru's Fun Banter With The Girls

While conversing with Prantika, Guru jokes and says he has done a lot of concerts in Kolkata and looks forward to her union with Mika since he has not seen many couples from Punjab and Kolkata together.

Akanksha does not miss her opportunity to dance with Mika with Guru singing in the background.

Mika winks at the camera and says he cannot let Neet or Prantika sit idle since hearts and mirrors can be easily broken.

After this fun dancing and singing, Guru says Mika never gets close to anyone if he does not like them genuinely.

Shaan then delivers a beautiful monologue about Mika’s journey on Mika Di Vohti and lip sings to songs liked by Mika.

After Shaan’s performance, Guru Randhawa lights up the stage with his power-packed performances.

Guru invites Akanksha to dance with him, then Neet, and then Prantika. In the end, he takes Mika’s hand in his, making Mika dance and groove to the contagious beats of Guru’s songs.

All the three princesses join Mika and dance, receiving a round of applause from the family members sitting in the audience.

The princesses also dance separately to woo Mika’s heart. Mika also enjoys himself singing his hit songs for the princesses.

Prantika, Neet, and Akanksha surround Mika at the end as all of them revel in the performance.

Guru Randhawa shakes hands with Mika and wishes him the best of luck before leaving the sets.