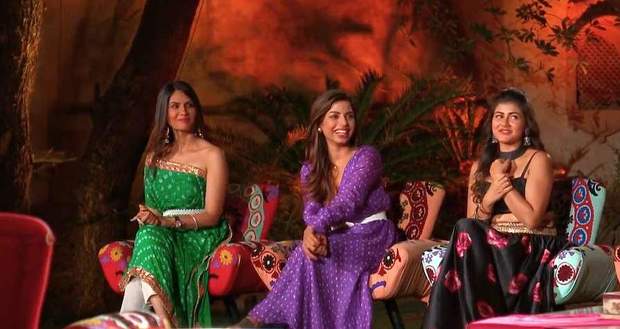 The game of Love by Chance is set in the middle and Mika has to take a card out of the blocks from a stack of blocks.

Shaan takes out the first card which has Neet’s name on it, which means she’ll go on a date with Mika.

The second card that is drawn has the challenge of saying a tongue twister and all the girls give it a shot once but no one could do it successfully.

Prantika’s name appears on the third card and everyone is jealous that Prantika is getting a second date even though there are people who haven’t got a single chance yet.

The next card says that Neet has to decide which person is barred from going on a date even if her name appears on a card and she takes Busra’s name.

The next card says that Mika has to tickle the girl standing farthest from him, that is Divya,  and she has to resist laughing throughout for going on a date.

She passes the challenge and gets to go on a date with Mika along with Prantika and Neet.

Mika starts by asking them about their childhood and gets emotional telling his own childhood stories, so Neet offers a massage to relax him.

The other two girls dislike Neet while she gives Mika a massage and also requests him to dance with her.

As they dance romantically, Prantika interrupts to dance with Mika.

A while later, Dhwani enters as well and hands over a message from Divyanka which says that she can get some alone time with Mika as per her wish.

The other girls are upset and jealous seeing this.

While reciting a short poem for him, she dislikes that Prantika and Divya come and interrupt her date.

Mika is also bothered by the childlike behaviour of Prantika.

Dhwani diverts attention by singing a song for Mika.

Mika gives a bangle to another girl

After coming back from the date, the remaining girls also join them and Busra says that none of the four girls were deserving to go on a date with Mika.

Neet retaliates by saying that Busra is always saying bitter things to everyone so she cannot have love in her heart.

Shaan tells Mika that he has to give a bangle to another bride.

While asking everyone who deserves it the most, all the brides take Ashralesha’s name and Mika agrees.

Shaan says that since there are only two bangles, Mika has to take one back from one of the girls but both of them are unwilling to give it back.

Mika asks Prantika to give the bangle back and as Prantika cries, Mika gives that bangle to Ashralesha and they go on a private date.

© Copyright tellybest.com, 2022, 2023. All Rights Reserved. Unauthorized use and/or duplication of any material from tellybest.com without written permission is strictly prohibited.
Cached Saved on: Monday 21st of November 2022 05:57:58 PMCached Disp on: Thursday 1st of December 2022 09:33:25 PM