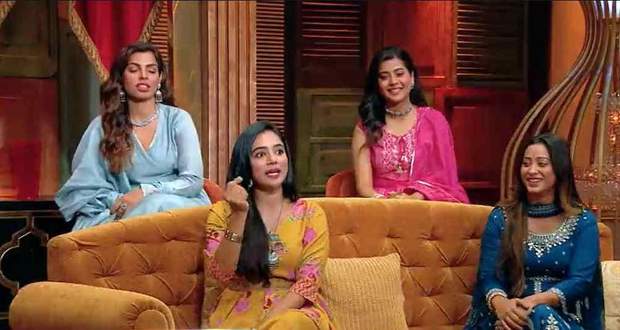 Today's Swayamvar Mika Di Vohti 24th June 2022 episode starts with Mika greeting all the brides and Shaan telling them that they can ask whatever they want from Mika.

Prantika asks Mika playfully if he snores in his sleep and Neet asks Mika’s views on having a pet.

Mika tells a story about his struggles in life and how he found happiness even in his bad days by compromising.

Busra asks Mika if he’ll ever be possessive or abusive in the future due to the presence of other men in her work life and business.

Mika tells her that no one will dare to come near her after she marries him, hearing which Busra blushes and gets tears in her eyes.

Divya asks him how he controls emotions of frustration and loneliness to which Mika replies that he has got strong with time.

Answering Chandrani’s question about his past, Mika says he has had 3 ex-girlfriends and tells his stories with them saying that his past has made him stronger.

Mika remembers how he met Neet a few years ago for a music video shoot and asks her what was her first impression of him.

She says that due to his controversies, she felt insecure and unsafe but after getting to know him, she got comfortable with him.

He asks Busra about her family and she tells him how unsupportive her family was about her studies and business and how she has cut off ties with them.

After hearing her story, the other girls realise that they might have judged Busra too quickly.

Shaan tells the girls that they need to shoot a video for Mika which is to be screened at a party he’s throwing for them.

All the girls enter one by one and they start screening the videos.

Ashralesha says in her video that being a lawyer has made her life black and white and Mika can add colours to her life.

Next, Neet’s video is screened and she tells him that she likes how desi Mika is and wants to preserve that by being with him.

Busra’s video is played next which has a very playful and comedic vibe.

In Chandrani’s video, she gets emotional reminiscing about her past and says she wants to do something for her family.

Divya performs some exercises in her video saying that like a workout, flexibility is also important in a relationship.

After all the videos end, Mika announces that he likes Neet’s video the most which makes the other girls jealous.

Neet is gifted a phone for winning this task and Mika calls her at night on this phone to have a phone call date.