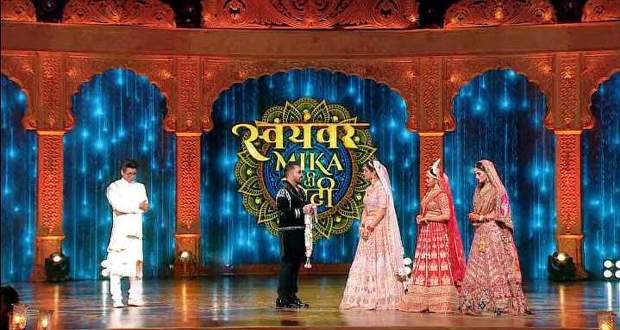 Shaan and Mika can be seen chatting with each other backstage. Shaan asks Mika if he is feeling nervous about the decision he has to make.

Mika says he is feeling nervous but people can not see it on his way.

Mika reveals about upsetting Neet and Prantika if he chooses Akanksha because they have been on Mika Di Vohti from the very beginning.

However, Mika also worries about upsetting Akanksha if he chooses Neet or Prantika because he shares a thirteen years old friendship with her.

Shaan then individually talks to each princess with the first one being Neet.

Neet says that a lot of misconceptions about Mika got cleared during her journey on Mika Di Vohti.

She reveals she used to think of Mika being arrogant before but found out that he is actually a soft and warm man.

Neet says Mika makes her feel like a Queen whenever she is with him.

Shaan then talks to Prantika and asks how would she feel if she doesn't become Mika Di Vohti.

Prantika says she won't overthink today because she is pleased with her journey and has done her best to showcase her love for Mika.

Shaan then converses with Akanksha and asks what would she do if Mika does not choose her.

Akanksha says her entry was late in this show but she is glad she made it to the top 3.

Akanksha says she will never lose Mika as a friend and other girls better prepare for her if one of them becomes Mika Di Vohti.

Shaan then introduces the audience to Shardul Pandit who welcomes artists working on different serials that air on Star Bharat.

Bharti jokes with the star cast of the Radha Krishna serial and throws cash in the air but picks it up later, saying she counted them all before throwing it.

Shaan delivers a beautiful compilation of romantic songs including "Channa Mereya" and "Tum Prem Ho" on the stage of Mika Di Vothi.

A moment later, Mika graces the stage in a black outfit that is a little unconventional for a Dulha.

Mika jokes that people have seen either "Dulhe" or "Raja" but Mika is both "Dulhe + Raja".

Bharti Singh then joins the stage with Shaan and dances to the Bhangra tunes with Mika.

Mika is not able to contain his laughter when Bharti jokes about Shaan's flying leg in the air while doing the Bhangra.

Shaan then asks Bharti to hand out some marriage tips to Mika to which Bharti has a perfect reply.

Bharti says all these giving tips is Shaan's duty since he got married a lot earlier than Bharti.

Bharti's ultimate punch line is a lot of Mika types can be "fika" in front of their lives and makes the crowd holler in laughter.

After acknowledging each of the Star Bharat TV serials' cast, Bharti leaves the stage and Shaan calls all the princesses to join the stage.

Neet Mahal is first to make her grand entry with a pink-themed Lehenga and ornate jewellery.

Prantika Das enters after Neet Mahal, decked up as a Bengali bride. Prantika says her journey has been special since she entered this show wearing a bridal dress and wishes to exit wearing one as Mika's Vohti.

Akanksha Puri makes her entry with a light pink lehenga, making Mika grin the most.

A montage of each of their journey with Mika plays on the stage.

Each of the girls' parents wishes Mika all the best to make his decision and give their blessings.

All the girls hold their breath tight after Shaan gives the Varmala to Mika and asks him to reveal who will be his Vohti.

Mika says whenever he is looking at Neet now, all their moments replay in his mind. He then looks at Prantika and says whatever his decision may be, he will always be Prantika's friend and support her in any way possible.

Mika then calls Akanksha's name and says if he marries Neet or Prantika, they would have to tolerate Akanksha since Akanksha knows Mika for thirteen years.

Akanksha says she is glad to enter Mika Di Vohti otherwise her romantic journey with Mika wouldn't have begun.

Prantika's face falls when Mika says he enjoyed every bit with her but is looking for someone who can be his friend before she becomes his partner.

He then says he found a friend in Neet whom he can rely upon.

However, Akanksha is a long-time friend of Mika's but Vohti can only be one girl.

Mika then teases everyone when he says Neet is Mika's friend but his Vohti is only Akanksha.