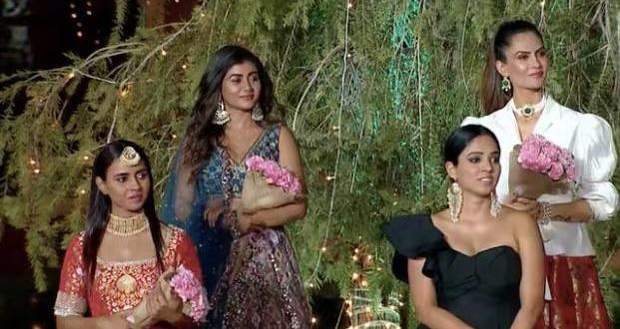 Today's Swayamvar Mika Di Vohti 27th June 2022 episode starts with welcoming a new guest in the game, Raveena Tandon, who interacts with the brides and tells them about the difficulties that come with being in a celebrity marriage.

Raveena plays a game with the girls in which the girls have to eat a laddoo each, some of which are sweet and the rest are spicy.

The game starts with Ashralesha who gets asked why is she marrying Mika, for money or for fame.

The next one is Prantika who gets asked what is her special talent, to which she replies that she can sleep anytime and anywhere.

Busra is asked if Mika wasn’t a celebrity, would she have married him and she says yes.

Raveena asks Dhwani if one of her crimes could be pardoned, what would she do, to which she replies that she would have married Mika and apologised to the other brides for breaking their hearts.

Commenting on Busra’s fierce nature, Raveena tells her to have confidence in herself and have a more positive attitude.

Neet says that for her, it’s good to marry a superstar so that she can be stable in life, to which Busra retaliates and says that Neet is fake and wants to marry Mika only for his money.

Neet agrees to this and says she is not answerable to Busra, which ends up in a fight between the two.

As the brides gather in a common area, Shaan calls up Prantika and Mika tells her that she’s safe from elimination, and so are Dhwani and Neet.

Divya is called up next and Mika tells her that he doesn’t feel a connection between them, so she has to leave the game today.

Busra is anxious about leaving the game and says that she doesn’t want to leave Mika, so he hugs her and says she’s safe.

Mika says to Chandrani that she is not talkative at all but still welcomes her to the show and tells her she’s safe.

Sonal is also safe from elimination but Mika tells Ashralesha that she has to leave today.

After the elimination, Mika and Shaan present a singing performance for Raveena.

Post the performance, Raveena asks the brides to gather around so that she can toss two bouquets towards them and whoever catches that will have her blessings.

After this, Raveena announces that there will be a few wild-card entries in the game to spice it up.

The first wild-card entry is Riya, from Mumbai and the second one is Manpreet, who is also from Mumbai.