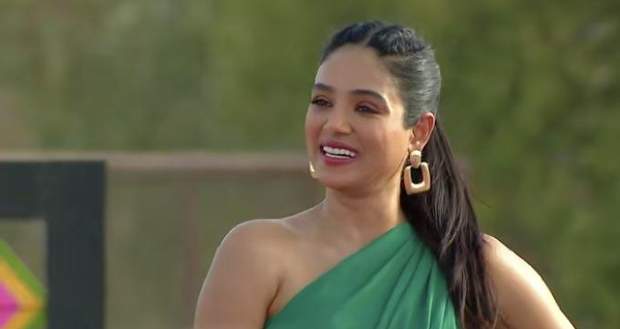 Today's Swayamvar Mika Di Vohti 28th June 2022 episode starts with Mika interacting with the two new girls who are the wild-card entries and he takes them to meet the current brides.

The brides are in shock that Mika has entered with two new girls, and Busra says she feels somewhat betrayed.

Match me if you can

Shaan announces the start of a new game, ‘Match me if you can’, in which Mika is circled by all the girls and they hold 3 placards each.

If Mika picks the placard which matches the thoughts of the bride as well, then the bride can step closer to Mika in the circle, and the finalists will get to go on a date with him.

In the first question, Shaan asks the girls where they’d like to go on their honeymoon and Busra feels like Manpreet is trying to copy her answer and they exchange bitter looks.

Riya is the only one whose answer matches Mika’s, and the other girls are surprised to see this.

Next, Shaan asks what they consider cheating in a relationship, kissing, flirting or keeping in touch with their ex, and Mika says that he considers kissing as cheating.

Manpreet and Neet are now closest to Mika in the circle.

Shaan asks the brides what they’d do in case they cheat in a relationship, and Busra says that she’ll hide it to protect her family but Mika says that he’ll disclose and discuss such a thing instead of hiding it.

Neet is the first one to enter Mika’s circle (bull’s eye) and Busra is jealous seeing that.

In the end, Shaan asks the girls to describe their first perfect date, and Riya, Manpreet, and Prantika end up winning along with Neet.

Shaan presents another bangle to Mika and says he has to give her to one of the girls on the date.

Busra says that she’ll be happy if Neet or Prantika receive the bangle but not if Riya and Manpreet do.

Mika starts the date by playing the game of dumb charades where the girls have to act out a song that Mika will sing.

Later, He presents a box of questions to the girls and asks them to answer those questions.

They’re asked whether they would prefer loyalty or romance in a relationship and Mika replies that he gives loyalty more importance but Neet disagrees with that.

Meanwhile, Mika says that he has to present a bangle to any one of them, and he gives it back to Prantika.

They both end up going on a private date and they play a game in which they have to find a ring in a bowl of petals and water, and Mika finds it and puts it on her finger.

He makes her sit on his lap and he jokes about Busra with her which makes her jealous.

As Mika sings, they both dance and sway with each other romantically.

© Copyright tellybest.com, 2022, 2023. All Rights Reserved. Unauthorized use and/or duplication of any material from tellybest.com without written permission is strictly prohibited.
Cached Saved on: Wednesday 23rd of November 2022 09:19:47 AMCached Disp on: Friday 2nd of December 2022 02:51:34 PM