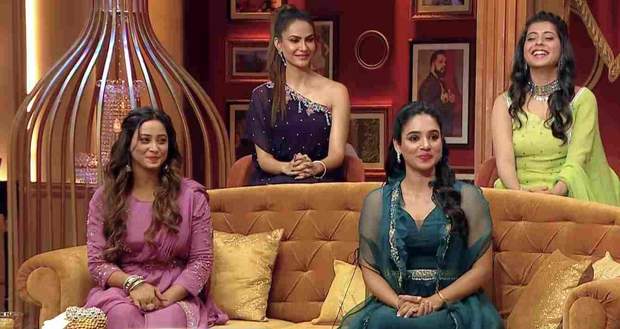 The girls play Flames with Mika

Meanwhile, in the palace, Sonal suggests the girls play Flames and teaches everyone while Prantika mocks her for playing such childish games.

Chandrani gets marriage with Mika according to the game and the girls start calling her a cheat for cutting off the wrong letter.

Elsewhere, Mika sits with Pandit Janardanji and he predicts Mika’s future saying that he will read the ladies' Karma and will see who is the most compatible with Mika.

Later, the ladies are greeted by Panditji and Prantika goes first as the Panditji states that she will be married to an artist.

Afterward, for Manpreet, Panditji says that she is short-tempered but has a huge heart.

Panditji tells Neet that she is a very strong-willed and family girl.

For Chandrani, Panditji says that her one marriage will break while she reveals that it has already happened as she sheds a few tears.

Further, she asks Panditji about her parent’s health and gets emotional as she is told to not worry about it.

For Dhwani, Panditji says that she is also fated to be happily married to a well-known artist.

Panditji tells Riya that she has broken one boy’s heart in the past intentionally which leaves everyone looking at her a little differently.

Panditji finally tells Mika and Shaan privately that there are two girls who are compatible with Mika and the names are Chandrani and Neet.

Shaan tells the selected girls that they will get a chance to go on a one-on-one date with Mika which makes a lot of girls jealous of Neet.

Mika goes on a date with Chandrani first and they enjoy their moments together as they exchange stories from their childhood.

They gaze into each other’s eyes as Chandrani gets shy and looks away which makes Mika smile.

Mike confesses to Neet that he likes her and wishes to have only her in the show which makes Neet ecstatic.

The next day, Shaan informs us that the month of Mika’s birthday is to be celebrated till the end and that the girls are preparing something for Mika.

Many girls are seen preparing a dance show for the celebration while the choreographer is shown praising Sonal’s hard work and Riya’s creativity.

Meanwhile, Chandrika tries to write something special for Mika.

Elsewhere, Prantika reveals that she is going to sing for Mika.

At night, the girls are welcomed on the special stage for the celebration.

Sonam reveals that she’s a bit nervous as she still hasn’t received even one Kangan.

Shaan inaugurates the celebration with his own performance after which Sonal is the first one to perform.