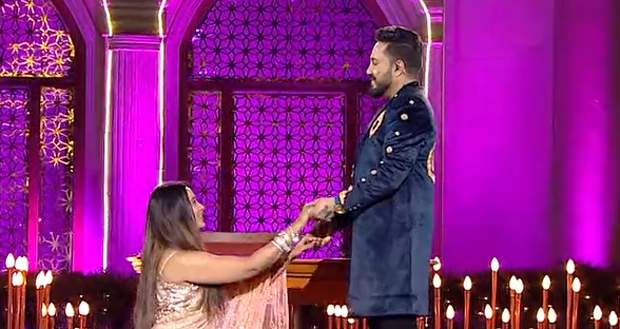 Today's Swayamvar Mika Di Vohti 30th June 2022 episode starts with Shaan announcing the next performance to be done by Manpreet.

Manpreet enters the stage wearing a heavy red lehenga and starts her dance to an upbeat Punjabi song.

However, Manpreet forgets the steps in between and struggles to keep her steps steady due to the insanely heavy lehenga.

Other contestants land their opinions about Manpreet and say that she has no emotional appeal and her performance was also a big flop.

Manpreet invites Mika to dance with her and gets complimented about her bubbly nature and cuteness from Mika.

Neet and Manpreet engage in an argument with each other where Manpreet taunts Neet by telling her that she is jealous.

Next comes Riya who performs a sweet song with Mika's photo.

Sonal complains that Riya ended the whole song while doing gestures in her sitting position which pisses off Riya.

To cool the atmosphere, Mika invites Sonal on the stage and sings the song "Dum a Dum Mast Kalandar" for both ladies.

Prantika comes next to the stage and sings a song dedicated to Mika where Mika himself joins to sing with her.

Chandrani also decides to sing a song for Mika that she had written herself in the past.

Changing the atmosphere into a light and laughter one, Dhvani performs a bit of mimicry incorporated with her singing which impresses Mika very much.

Neet shows her life story to Mika through her dance performance and breaks into tears when Mika hugs her.

At Neet's request, Mika sings a song for her but after that Manpreet's comment inflicts an argument between the two again.

After all the performances end, Shaan calls Mika on the stage and asks him to perform a final song and choose the one girl whose performance impressed him the most.

Mika performs the song "Raat Baki" and selects Riya and Sonal to come with him on the stage.

Riya and Sonal are asked to close their eyes as Mika will put Mehendi on one of their hands and declare her as the deserved contender to receive the bangle.

After a couple of seconds, Mika decides to put the Mehendi in Riya's hand.

The episode ends with Shaan asking Mika from whom Mika wants to take away her bangle and give it to Riya.