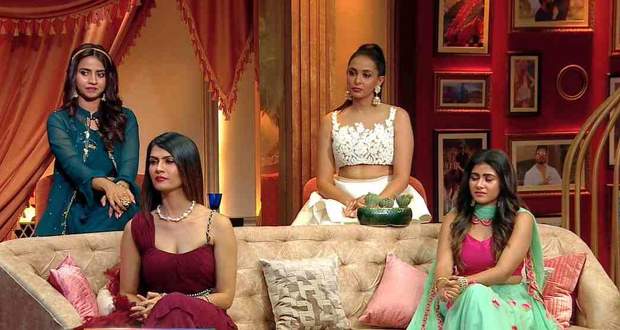 Today's Swayamvar Mika Di Vohti 4th July 2022 episode starts with Shaan greeting the viewers and stating that today’s episode will be very interesting as Farah Khan is going to be on Mika Di Vohti.

Farah Khan who is a celebrated director and choreographer of Hindi Cinema is welcomed with an amazing Rajasthani Dance.

Shaan tells her that she will have to chit-chat with the girls and also reveal who said what to each other by reading their statements.

The girls get very excited to see Farah Khan as Mika and Shan take their leave.

The chit-chat starts with Farah asking Riya to guess the girl who said that Riya is a back-bitcher.

Riya then proceeds to give chewing gum to Busra and tells her to shut her mouth.

However, Farah reveals that it was not Busra but Chandrani who said this thing about Riya.

Farah then asks Sonal to guess the girl who said that Sonal is very boring.

Sonal guesses Riya right and hands her a tape to seal her mouth with.

However, the biggest tiff occurs between Busra, Neet, and Manpreet when Farah asks Busra to guess the girl who said that Busra is the biggest trigger.

However, when Farah reveals that it was not Neet but Manpreet who said this, Neet smiles and says Busra should now take the same cactus in her mouth she wanted to shove in Neet’s mouth moments ago.

Meanwhile, Shaan and Mika discuss how girls get so aggressive with each other sometimes that makes Mika a bit concerned.

Farah then asks Neet to guess the girl who said Neet is double-faced.

Neet guesses Bursa, however, it is Chandrani.

Prantika tries to taunt Neet for being friendly with Chandrani but Neet says Chandrani must have said this in a positive light.

Farah ends the guessing game and advises the girl to stay patient as one of them is going to marry a celebrity.

Saying that it is a different kind of ball game, Farah states that it takes a lot to uphold marriage and make your man happy whilst he is a celebrity because many people are ready to throw themselves at him, not caring whether he is married or not.

When alone, Farah advises Mika to go on a solo date with Manpreet because Farah found Manpreet to be the most balanced out of all the girls.

However, Mika is nervous about the elimination round.

The girls hope that Busra will be eliminated but Mika saves her.

It is Sonal who gets eliminated but Farah tells her to be strong as she has found a good friend in Mika always.

© Copyright tellybest.com, 2022, 2023. All Rights Reserved. Unauthorized use and/or duplication of any material from tellybest.com without written permission is strictly prohibited.
Cached Saved on: Friday 27th of January 2023 11:32:49 AMCached Disp on: Sunday 5th of February 2023 01:59:27 PM