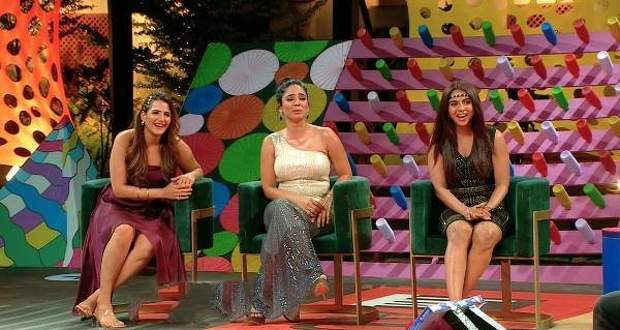 When they hit the gym, Mika tells Shaan to use smaller weights for him to exercise.

However, Rahul Vaidya and Gurdeep Mehndi secretly join Mika in the gym and add weights to his lifting tool.

Mika chuckles when he realizes that Rahul and Gurdeep have joined him.

Later, the princesses of Mika Di Vohti come all dressed up, dancing to the peppy tunes of Mika’s songs.

Shaan greets all of them warmly and tells them that Mika’s dear ones are going to join them on stage.

The girls get excited when Mika reveals that Rahul and Gurdeep Mehndi, Daler Mehndi’s son and Mika’s nephew are coming.

Busra asks Rahul what does Mika when he feels emotionally down.

Rahul tells Busra that Mika usually sits alone and listens to Gurbani when he is feeling sad or depressed.

Manpreet says backstage that she does the same and feels very connected to Mika.

Manpreet questions irk Chandrani because Chandrani believes if Manpreet knows Mika for three years, she should know this.

The atmosphere of Mika Di Vohti gets funnier when Gurdeep reveals the way to Mika’s heart is through paranthas, pickles, and lemons.

A game of musical chairs

Later, the girls play a game of musical chairs and the one who wins will get to do a couple of dances with Mika.

Busra fights with Manpreet as she gets removed from the game fast.

Mika says that the smartest amongst the girls playing the musical chair is only Manpreet and Riya.

However, Manpreet wins and gets to dance with Mika on the stage.

All the other girls boo her and make faces when Manpreet gets close to Mika.

In private before leaving the stage, Rahul reveals that he found Prantika and Manpreet to be the most compatible with Mika.

However, Gurdeep liked Manpreet and Neet to be the most compatible.

The next day, the message gets delivered to the girls that Prantika, Neet, and Manpreet will be going on a group date with Mika.

Later, Ajit Mehndi who is Mika’s niece, and Daler Mehndi’s daughter along with her husband, Navraj Hans graces the stage of Mika Di Vohti.

A family-like atmosphere begins to form when Ajit reveals to the girls that Mika is a great cook.

Dhwani smiles and likes the fact that Mika can cook.

However, Busra gets into a mild argument with Mika when a conversation regarding the status of a husband and a wife gets discussed.

Mika tries to tell Busra that whoever girl he will marry will get all his wealth and will start her life higher than what Mika started with.

This gets misinterpreted by Busra who feels unequal in this discussion with Mika.

© Copyright tellybest.com, 2022, 2023. All Rights Reserved. Unauthorized use and/or duplication of any material from tellybest.com without written permission is strictly prohibited.
Cached Saved on: Wednesday 25th of January 2023 04:11:56 PMCached Disp on: Thursday 9th of February 2023 07:59:40 AM