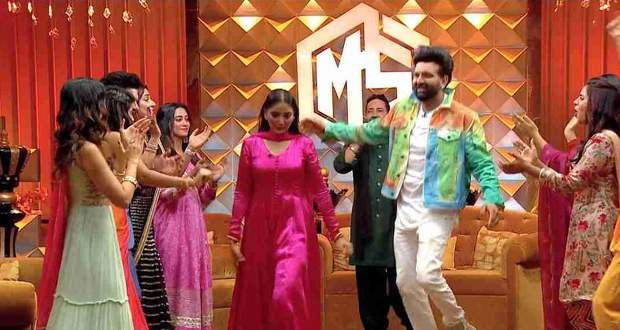 Ajit brings out a whiteboard with Mika’s entire family tree traced on it and the brides have to remember the names of all of Mika’s family members.

Shaan then questions the brides with puzzles about Mika’s family ties and they all try to guess it first.

Before the memory game ends, Mika requests Navraj to sing a song for the brides and presents a Punjabi song for them.

Ajit and Navraj light up the room with their dancing as Mika sings as well.

After that, the girls play a game where they are asked what would they call Mika in front of his family members, and they all get playful with their answers.

Navraj announces the next game to be played in which the couples have to untie an auspicious thread from each other’s hands while looking directly into their partner’s eyes.

In this game, Navraj and Ajit would be going against Mika and Chandrani.

Ajit and Navraj win the game as they untied the thread quicker than Mika and Chandrani.

After that, they play a game in which the brides are asked what they would talk about on their first wedding night to make their partner comfortable.

Dhwani is called first and Radhika asks her and Mika to compliment each other.

Manpreet gets bitter and says that whatever Dhwani said to Mika was quite boring and believes that her kissing Mika, in the end, was stupid.

Next, Riya is called to say a promise that she intends to keep with Mika but Neet feels that Riya isn’t serious about being with Mika.

They make several promises to each other but Radhika feels that it seems more like a negotiation than a promise.

After that, Manpreet and Mika are asked about the time they realised they could be each other’s life partners.

Radhika then invites Busra next, but the other girls seem to think that Mika is resisting Busra and Riya says that there is no romance between them.

Everyone got invited to play the game except Neet and Prantika and they feel hurt by that.

After the game ends, Shaan requests Navraj to sing a romantic song for Ajit and Shaan joins the performance as well.

Post that, Shaan asks Ajit and Navraj which bride they like the most and they take Manpreet’s name, seeing which the other girls get jealous.