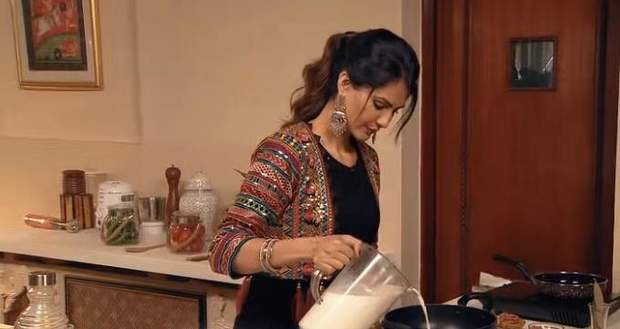 Today's Swayamvar Mika Di Vohti 7th July 2022 episode starts with Mika cooking a dish for all the brides as they all come down to greet him.

As Riya and Prantika come to assist Mika, Busra gets jealous that they always jump at the opportunity to interfere.

Seeing Riya not being able to beat the eggs properly, Busra comes and takes it from her to do it herself.

As they all eat the food made by Mika, Shaan announces that they all have to make one dish each to impress Mika in order to get a ‘Pyaar ka Kangan’ from him.

The Brides Cook For Mika

All the girls cook up something and they gather with Mika at a common dining table.

The girls are not allowed to tell Mika which dish have they cooked, otherwise, their dish will get disqualified.

The first dish presented is the halwa made by Riya which Mika likes, but Prantika says that it is supposed to have more ghee.

Next, Dhwani’s Pulao is presented and Mika likes the dish, and he also loves Prantika’s chicken.

Neet’s kheer is presented next and Dhwani feels that whoever made it put a lot of effort into making it which should be appreciated.

Mika also likes Busra’s biryani and appreciates the presentation of the dish.

About Manpreet’s rajma, Busra says that whoever made this doesn’t know how to cook.

While complaining about Manpreet's dish, Busra accidentally says that she was the one who cooked the biryani and her dish gets disqualified.

After all the dishes were presented, Mika says that he liked Neet’s kheer the most and she is surprised to hear this.

Shaan announces that Neet will get a chance to go to the Polo club as a chief guest with Mika for their date.

As the time comes to give Neet the bangle, Mika asks Riya to give the bangle instead of Prantika so that he can hand it over to Neet.

They both arrive at the Polo club as chief guests for their date and Neet feels elated to be there.

She says that she feels like a queen and is honoured to be there as the chief guest with Mika.

The game of Polo starts and Mika and Neet are seated at a stage to enjoy the game being played in front of them.

Mika feels that they bonded a lot over the date and they present the trophy to the winners in the end.

© Copyright tellybest.com, 2020, 2021. All Rights Reserved. Unauthorized use and/or duplication of any material from tellybest.com without written permission is strictly prohibited.
Cached Saved on: Monday 8th of August 2022 01:05:44 AMCached Disp on: Saturday 13th of August 2022 11:18:10 PM