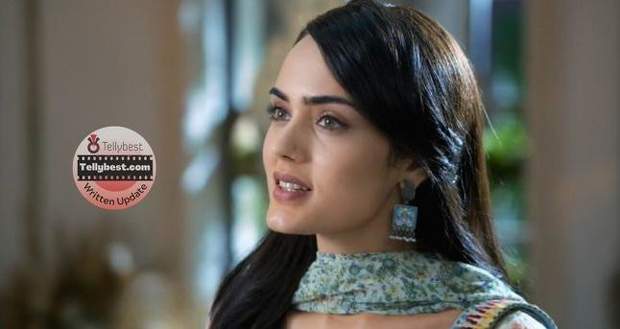 Today's Teri Meri Dooriyaan 10th January 2023 episode starts with Seerat groaning when she doesn't see anything good to be worn at the party at Brar's.

She calls herself the unluckiest in the world while Taiji asks her to be a little more positive.

Santosh comes there and gives Sirat a white saree to wear with golden work done but Seerat groans looking at this.

She says that the color is very dull while Keerat jokes and brings Seerat's facial bowl, saying she should apply it to the saree so its color gets enhanced.

Seerat asks Santosh to tell Keerat to be quiet and keeps stressing herself out.

Just then, Sahiba comes and is given the good news by Santosh about the passes.

Sahiba feels thankful that Santosh and Seerat's heart is not broken but at the same time, she doesn't want them to go.

Sahiba tells Santosh not to go since the Brar's are troublesome and humiliates their guest.

However, Seerat says that Sahiba's condition has become stereotypical since she sees every rich person to be cruel.

Seeing Seerat also complain about a dress to wear, Sahiba volunteers to stitch one for her.

Meanwhile, Gary comes to sit beside Angad who is still tracing the person who leaked the news to the media.

As a part of the flashback, Gary is seen chipping the SIM of the servant's phone he used & appreciating himself for being full of swag.

The flashback ends and currently, and Gary asks Angad to forget about that person and focus on the positive as everyone is raving about the Paath decoration.

Angad curses Sahiba as he remembers her splashing pink color on his sherwani and calls her mad.

At Monga House, Santosh is curling Seerat's hair while Sahiba gives the dress she stitched out of that dull saree to Seerat.

Seerat gets genuinely happy and thanks Sahiba for making this designer-looking dress because now she will look "Ghaint" (the Punjabi word for pretty looking).

At Brar House, Manveer calls Angad into her room and asks him to get ready but Gary comes there, wearing the sherwani Manveer picked out for Angad.

She scolds Gary who pretends to be innocent while Angad says Gary can wear it since he looks handsome in it.

Veer comes there & lightens up the situation, while Manveer & Angad's aunt discusses the kind of girl Angad will marry.

Back at Monga House, Seerat gets ready and does a little catwalk for Santosh and Sahiba.

However, her complaints start again when she realizes she doesn't have a matching earring.

Sahiba asks her to be positive for once and goes upstairs to bring her earring for Sirat.

Santosh then asks Keerat to get ready who makes a disgusted face when asked to attend the function at the Brar's also.

Santosh emotionally blackmails her by threatening to stop her roaming out on bikes with friends and her Kushti (wrestling) and Keerat get ready while crying funnily.

Meanwhile, while Angad is looking at the preparations being done, Veer starts a discussion on perfection and Gary joins the conversation as well.

As Angad discusses how he wants a well-mannered and perfect bride who values family, Veer wishes that Angad finds a bride that not only matches his checklist but has a good heart too.

Gary's brain is working differently who thinks how funny it would be if Angad doesn't change his dirty sherwani and attends the function in it?

Meanwhile, Sahiba gives her earrings to Seerat who wears them and Santosh compliments Sahiba for possessing a big heart.

Seerat asks Sahiba not to do bargaining as she applies lipstick on her lips while Keerat says Seerat will look like a "chudail" otherwise.

An exasperated Seerat asks Keerat not to eat her brain while Keerat replies how can she eat something which is non-existent?

Santosh also comes dressed up and shows off her hair accessory & then asks Sahiba to get ready too.

© Copyright tellybest.com, 2022, 2023. All Rights Reserved. Unauthorized use and/or duplication of any material from tellybest.com without written permission is strictly prohibited.
Cached Saved on: Wednesday 25th of January 2023 09:11:41 AMCached Disp on: Wednesday 1st of February 2023 06:17:16 PM