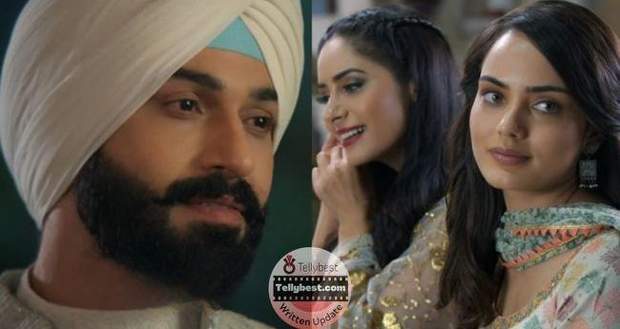 Today's Teri Meri Dooriyaan 11th January 2023 episode starts Santosh asking Sahiba to join them but Sahiba says that she doesn't want to go as there are only 3 passes.

Santosh says that she will manage the entry and starts persuading Saiba to join them.

Santosh then says that once they find a groom for Seerat then it will be very easy to find husbands for Keerat and Sahiba as well.

Sahiba says that she doesn't like the pretentious world of the rich and wants to stay as aloof as possible.

Santosh says that if she is marrying a man then at least marry a rich one and enjoy for the rest of her life.

Sahiba says that her dream is to make her name not marry someone else for money.

Seerat says that she doesn't want to go on a rickshaw while being so dressed, Sahiba gives her some money and asks her to take an AC cab instead.

Later, Seerat, Keerat, and Santosh leave for the Brar mansion.

On reaching there, Santosh gives a sigh of delight when she sees the mansion.

Santosh and the others then stand in line and start interacting with the girl standing in front of them.

Santosh then breaks through the line and asks the guard to put a cooler on the lawn as Seerat's makeup will be faded because of the heat.

The guard asks for the passes first at which Santosh finds out that she has left the passes at home.

The guards ask them to move aside and leave. The security in charge comes from inside and looks at Santosh.

Meanwhile, Sahiba and Tai ji are discussing Santosh and Seerat.

Sahiba then finds the passes lying beside her.

She quickly takes her bag and leaves for the Brar mansion.

Back at the Brar mansion, Santosh accuses a man of stealing their passes and starts snatching them away from him but the guard comes and tells her to leave immediately.

Seerat says to Santosh that she insulted her before going inside in front of everyone.

Keerat snaps at Seerat and says it doesn't matter.

Santosh then asks Seerat to wipe her tears as she will do something and get them inside the mansion.

Santosh pretends to talk to Brar on the phone and starts moving toward the entry gate but the guard stops her and says to ask Brar to talk to the guard himself.

Santosh says that they are VIP special guests and if they do not let them enter then they will inform Brars about it.

The guards hold her and push her back but Sahiba reaches just in time and prevents Santosh from falling down.

Sahiba holds Santosh's hand and goes to the guard and scolds her for carrying out her responsibility in such a careless manner and then hands the guard the passes.

The security in charge comes from inside and looks at Sahiba.

He recognizes her and says that he didn't realize that the family was with her and welcomes everyone inside.