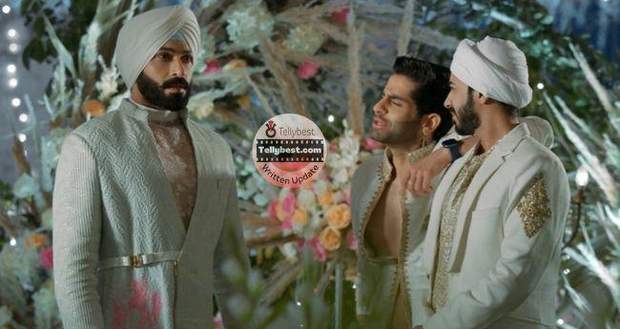 Today's Teri Meri Dooriyaan 12th January 2023 episode starts with Keerat giving her earphones to Sahiba and asking her to attend the party in her place as she is done with all the drama that has taken place.

Sahiba says that Keerat should go in as if she goes then Sahiba won't have anything to worry about.

However, before Sahiba could leave, Veer spots her and starts appreciating her artwork while Sahiba compliments his voice.

He persuades her to come inside and see the decorations herself.

Sahiba remembers the time when Angad insulted her and asked her to get out of the house and thus refuses.

Veer keeps insisting and Sahiba finally gives in and goes inside.

Meanwhile, Santosh and Seerat are delighted to see the beautiful decorations. Santosh spots Angad while Seerat tells her that he is the eldest son of the Brars.

Santosh forces Seerat to go to him and talk to him and so Seerat goes to Angad and intentionally runs into him and starts falling down.

However, Angad holds her before the fall making Santosh very happy.

This turns out to be Santosh's imagination as when Seerat runs into Angad, he just moves aside, says sorry and starts walking again.

Seerat is furious that Angad did not even see her since this has never happened to her while Keerat teases Seerat and starts laughing when Santosh compliments Seerat's beauty.

Meanwhile, Veer and Sahiba are walking together in a secluded corner.

Veer asks Sahiba to define art in opinion to which she replies that art can't be defined as it is the definition of the heart itself. It is free from all the restrictions.

Back on the stage, the function begins when Sardar Akal Singh Brar and Sardarni Jamjyot Kaur Brar are called up onto the stage.

Akal Brar says that in a marriage a husband should always listen to his wife making everyone laugh.

In the meantime, Hansraj says that marriages should be long and successful and shouldn't break in a span of 5 years.

Jasleen says that she knows, he is trying to mock her but she has seen the world and thus understands that when relationships start acting like barrels on the way, they should be eliminated.

Jasleen then mocks Hansraj and says that she is at least better than Hansraj who acts like a live-in son-in-law.

Back on the stage, Brar says that successful relationships are due to strong supportive families.

Their family is their strength and weakness at the same time.

The press asks him that if his family is so ideal then why his eldest son Mr. Inder Pal Singh Brar is absent from all his family functions?

Akal Brar then remembers his conversation with Inder when he broke his hockey stick and Inder revolted against it.

Meanwhile, Angad asks Inder to join them in the function as it will make Brar very happy.

Inder says that he is not a showpiece that Brar can display on the stage.

Back at the stage, Akal Brar says that people will always find faults because they can't bear to look at perfection.

Brar then calls Angad onto the stage which gives Santosh a chance to go to the front seat and sit there along with Seerat and Keerat, sidelining everyone on their way to the front row.

Meanwhile, Sahiba overhears a few girls talking about the beautiful decorations for the event.

However, before Veer could take Sahiba to those girls, Kiara claimed to be the head designer of the Brar jewelers and takes credit for the event's decorations.

Veer is infuriated and goes to Kiara to stop it, however, Sahiba stops him and says that people can steal the credit but can't take away her art.

© Copyright tellybest.com, 2022, 2023. All Rights Reserved. Unauthorized use and/or duplication of any material from tellybest.com without written permission is strictly prohibited.
Cached Saved on: Wednesday 25th of January 2023 10:04:18 AMCached Disp on: Tuesday 31st of January 2023 07:41:33 PM