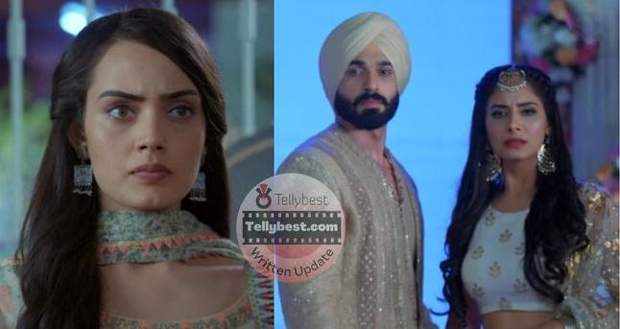 Sitting on the front sofa with Jasleen, Gary eyes a beautiful interviewer and winks at her.

Daar Ji asks where Angad is on the mic while Jasleen rolls her eyes at Gary and asks him to focus.

Gary doesn't understand Jasleen's point and urges him to go up on the stage and seize the moment as girls in his life will come & go.

Gary goes up to the stage and greets everybody while a few guests question where Angad is.

Santosh also gets curious and asks Seerat if she knows the boy but Seerat denies it but likes Gary's fashionable style.

However, the limelight focus on Angad as he comes with a golden hands-held relic of Akal & Japjyot with lots of dhols celebrating it.

Angad happily tells everyone a childhood tale where one day, a thief stole one of the most expensive jewelry sets from their store but that didn't faze Daar Ji.

Angad says that Daar Ji taught him a lesson that day by saying that the thief indirectly told them that their item is the best among all the other jewelry shops in Ludhiana.

Angad also announces that the new project head of Brar's will be his brother and Gary thinks it is going to be him.

However, Angad takes Veer's name who humbly accepts the position and bows down.

Everybody erupts in cheer as Angad announces a Giddha competition for all the ladies who may register their names in the back.

Meanwhile, Daar Ji goes inside the house but stops when he sees Inder's shadow.

When Daar Ji leaves, Japjyot asks Inder to come out and wishes his mother a very happy wedding anniversary.

Japjyot asks him where is her gift and he gives her a hair tie, saying she deserves a lot to tolerate Daar Ji throughout these years.

However, Daar Ji isn't going anywhere but holds tears in his eyes when he hears Inder say this.

On the other hand, Santosh asks Seerat to take part in the Giddha too, because she has to get Angad's attention and become Mrs. Brar one day.

Meanwhile, Gary messages the female interviewer to ask Angad why his Sherwani has a pink color.

The female interviewer asks Angad the same question who gets reminded of Sahiba and gets angry instantaneously.

Meanwhile, Sahiba roams around on the ground when Keerat grabs her to one side and informs her how Santosh is pressurizing Seerat to do the Giddha who doesn't even know how to rotate her hands.

Sahiba scolds Santosh for doing so and judges the Brars while Seerat takes offense to Sahiba's careless attitude toward the rich.

Santosh shows a few videos to Seerat on how to do Gidda and also requests Sahiba to teach her so Angad's attention falls on their beauty queen.