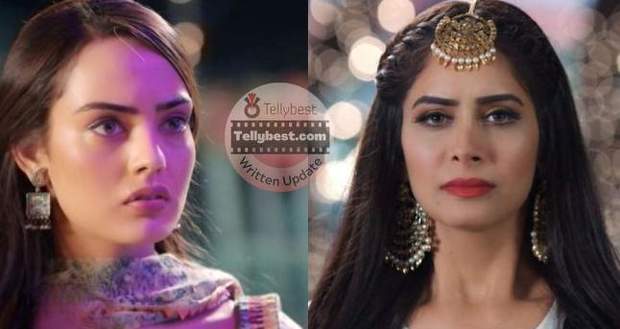 Sahiba rolls her eyes when she hears Santosh's reason to make Seerat learn Giddha only to earn these Brar boys' attention.

However, when Santosh goes a little overboard, Sahiba finally agrees.

Taking Seerat to one side along with Keerat, Sahiba teaches her how to move her legs while doing Giddha.

Seerat gets frustrated when she doesn't figure out how to do Giddha and Keerat says Seerat cannot do this.

Seerat shows Keerat a slap and the announcement of writing one's name for the Giddha competition occurs.

Santosh drags Seerat to the line to have her name written while Sahiba gets interested when she sees Veer perform on stage.

Sahiba smiles once the performance ends, and all the girls who had their names written are called.

Santosh forces Seerat to take a wooden Saap/Chhikka (used for Giddha) and she climbs up the stage when her name is announced.

Sahiba gesticulates toward Seerat to look at her while she does Giddha and Seerat nod.

Once the performance begins, Angad cannot take his eyes off Seerat and she realizes that.

Veer's mother takes a notice of this as well and teases Manveer with the information but Manveer doesn't like it.

Angad takes notice of Seerat again and again looking at the back and turns around to see if she is copying somebody's steps.

Slowly, all the other girls who are dancing with Seerat start to drop their Giddha instruments suddenly after feeling an itch in their hands.

In a flashback, Santosh can be seen acquiring spices from the dining counter and mixing it with lime juice to be applied on all these props except the ones used by Seerat.

Only Seerat is left on the stage and she invites Angad to dance with her as well.

Angad accepts her proposal and both of them dance to the happy tunes until Sahiba sees a black pin about to hurt Seerat.

Sahiba runs to the stage and puts her palm across the black pin, making Seerat fall into Angad's arms.

Seerat's mouth dramatically opens in a big 'O' as she falls in the lap of the eldest of the Brar but Angad is more interested in lashing out at Sahiba.

He stops her and questions why she is here again when she swore never to come back.

Sahiba keeps listening to his insults while Keerat rolls her up sleeves and almost goes to Angad to beat him up.

However, Santosh gets angry and stops Keerat, reminding her that it is not an "Akhada" (wrestling ring).

Meanwhile, Angad asks Sahiba who even invited her, and shames her for wearing simple clothes to a party.

Veer comes in defense of Sahiba and puts Angad back in his place.

Jasleen and Gary smile at each other, appreciating Sahiba's guts when she insults Angad publicly, asking him to do a little soul searching because he is no one if Brar surname is taken away from him.

Santosh fears that Angad won't like Seerat if he comes to know that Sahiba is her sister.

Sahiba tells Angad that the one who raises their voice is the one in the wrong to prove their point and also shuts up Kiara who jumps in out of nowhere.

When Sahiba goes to Seerat to ask if she is okay, Seerat asks her to go while Angad cautions Sahiba not to make any relation with the guests to gain little sympathy.

Sahiba ignores him and asks Seerat again but Seerat pretends not to recognize her, making Sahiba feel hurt.

© Copyright tellybest.com, 2022, 2023. All Rights Reserved. Unauthorized use and/or duplication of any material from tellybest.com without written permission is strictly prohibited.
Cached Saved on: Wednesday 25th of January 2023 10:16:36 AMCached Disp on: Monday 6th of February 2023 06:12:29 AM