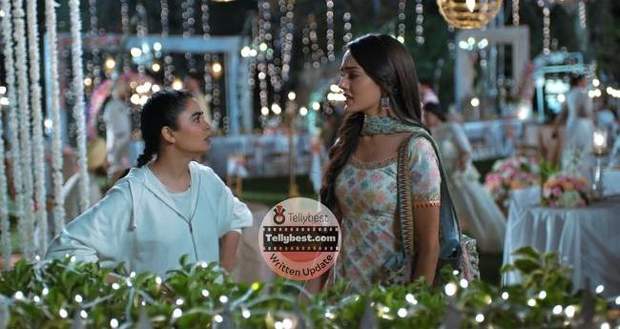 Sahiba’s heart breaks open when she sees Seerat pretend not to know her.

Angad nods at Seerat and apologizes for not asking her how her pain is and focusing on elements like Sahiba.

However, Sahiba couldn’t care less since she is reeling from the pain Seerat forced onto her.

Her eyes become watery along with Keerat’s who just want to bash Santosh and Seerat together.

Santosh steps toward the stage and screeches at Sahiba to leave when everyone asks her to do so.

Sahiba’s hearts break further as Seerat looks like she is apologizing to Sahiba, through her facial expressions, but then tells Angad to ask Sahiba to leave as soon as possible.

Veer's mother politely asks Sahiba to leave too as she doesn't want any drama but Veer scolds his mother for blaming Sahiba for the drama.

Kiara calls security but Sahiba holds her palm in the air, saying she doesn’t need to do that.

Sahiba leaves the Brar Mansion while Seerat breathes a sigh of relief and applies her next strategy to steal Angad’s attention.

She pretends not to be able to walk while Angad asks her if he can help carry her.

He also calls his room help, Pam, to be ready with an ice pack.

Jasleen asks Gary if he is seeing what she is seeing since Angad never looked this immersed in a girl before.

Angad carries Seerat in his arms in front of everyone while Keerat scolds Santosh for acting the way she did with Sahiba.

However, Santosh asks her to keep quiet since she is not the mother here.

On the other hand, Sahiba walks on the street slowly, still reeling from the humiliation she had to face.

With tears just threatening to spill out, Sahiba spots Keerat who hugs her instantly.

Keerat asks Sahiba not to be a good person every time and Sahiba cries.

Sahiba says she realized that Santosh and Seerat wanted to be there, so she didn’t say anything while Keerat is of the opinion that Sahiba shouldn’t be like the sugar syrup of Rasgulla.

Instead, she should be like the spicy water of the Gol Gappa. Keerat’s analogy makes Sahiba laugh and both of them eat Gol Gappa at a road stall when they see it.

Sahiba then asks Keerat to return to the Brar function and take care of Santosh and Keerat.

When he says he is going to call the doctor, Seerat says that the pain will be fine.

Meanwhile, Keerat returns to the party but bumps into Veer who falls down on the ground.

He asks the man to be careful while walking and Keerat removes her cap and asks Veer if she is a “bhaisaab” or a woman.

Keerat offers her hand to Veer to get up and then later complains about the exotic food that is available to eat whose names she cannot even pronounce.

Veer appreciates Keerat of her sturdy, strong body and gets impressed by her.

Angad gets a call and leaves Seerat while Kiara enters the room with two of her friends.

To get information on who Seerat is, Kiara first asks where she got the beautiful dress from.

Seerat makes up a fake designer name of Sahiba and says her designer friend personally designed this dress for her.

Kiara doesn’t get convinced and then asks Seerat who the other girl was whom she arrived at the party with.

Seerat says that it was her bodyguard (Keerat).

Manveer questions Santosh about what she is doing there & catches her off-guard.