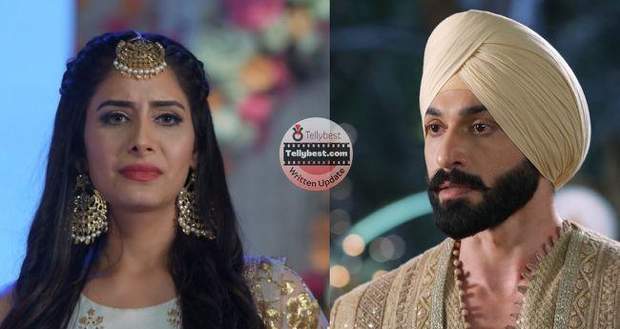 The cheeky smile from Santosh's face fades away as she gets enquired by the Brar family members but Veer's mother, Gurleen, enlightens Manveer that the girl sitting inside is her daughter.

Santosh nods, thankful that her awkwardness is saved, and replies to Manveer, saying she wasn't peeping inside, she was just here to knock, knock since Seerat is her daughter.

Jasleen eyes Santosh amusingly while Manveer walks inside and asks Seerat how her foot is feeling right now.

Seerat handles her foot with the ice pack and Angad walks in, still dazzled by her beauty.

Seerat tells Manveer that she is feeling much better, all thanks to Angad Ji.

Angad asks her not to add 'Ji' in his name and just call her Angad.

Jasleen internally compliments Seerat for flirting with Angad in front of Manveer while Manveer sends Angad to Daar Ji's room.

Seerat then hides one of her Jhumkas under Angad's pillow so he remembers her later and has a reason to meet her.

Meanwhile, Daar Ji replays Inder's words inside his head as Japjyot walks in and shows the gift Inder gifted her.

Daar Ji tells Japjyot that it is not a gift but a medal given to her by Inder for tolerating him (Daar Ji).

Later, Gary teases Angad for eyeing Seerat and taking her to his bedroom on a first date.

Angad widens his eyes and asks Gary not to make fun since Seerat's foot got hurt, nothing else.

However, Gary understands how much Angad likes Seerat and decides to steal her away from him just like he snatched Gary's opportunity to handle a project.

Angad walks into Daar Ji's room along with Gary and Daar Ji asks him to announce the results of the Giddha competition.

Japjyot says that she heard not all the girls were able to participate while Jaspal says there is no purpose in announcing the results.

Veer is of the same opinion but Angad says that one girl made it to the end and it is Seerat Monga Kaur.

Gary corrects him that even she fell but Angad says he just wants to credit the person who did the best.

Meanwhile, Sahiba reaches back home as her father (Ajeet) asks if she is the one who arranged the passes.

Sahiba tries to lie but Ajit says he knows and then asks Sahiba why she came back and didn't stay with Santosh and her sisters.

Sahiba remembers how Angad humiliated her and Santosh and Seerat disowned her and lies to Ajit once again that she felt sick.

In Angad's room, Santosh, Gurleen, Manveer, and Jasleen all have tea.

As soon as the servant serves tea to Seerat, Santosh chimes that Seerat doesn't drink tea due to diet purposes.

Gurleen chuckles and tells Santosh that dieting doesn't suit Sardarnis like them while Manveer looks at Gurleen strictly.

Jasleen then questions Santosh who invited her but Gurleen saves her, saying she might be Inder's guest.

Gurleen gets up to get some sweets while Santosh mumbles that soon enough, they will be exchanging sweets for Seerat's marriage.

Both Manveer and Gurleen ask Santosh if she said something while Jasleen understands that Santosh is lying.

Back at Monga House, Ajit tells Sahiba that he is worrying about others with whom Santosh might be spending time since it is late now.

Sahiba shakes her head in disbelief but Ajit is well aware of Santosh's bluff and antics.

© Copyright tellybest.com, 2022, 2023. All Rights Reserved. Unauthorized use and/or duplication of any material from tellybest.com without written permission is strictly prohibited.
Cached Saved on: Wednesday 25th of January 2023 04:49:50 PMCached Disp on: Tuesday 31st of January 2023 06:12:45 PM