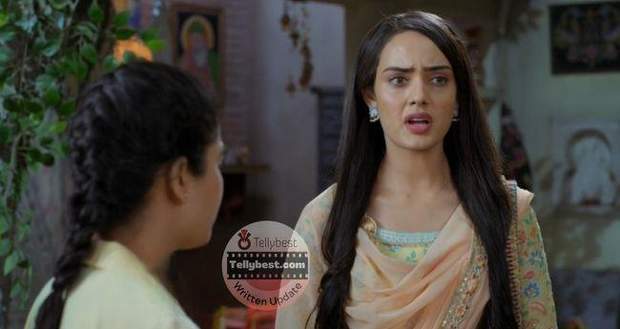 Today's Teri Meri Dooriyaan 17th January 2023 episode starts with the doctor checking Seerat while Santosh is trying to find a way to send the doctor away as she knows Seerat is faking her ankle pain.

Santosh thanks the doctor and then asks the host to excuse Seerat and her from the party.

Jasleen thinks to herself that she can't let Seerat go until and unless she finds out everything about Seerat and her intentions.

Jasleen makes Seerat stay by telling her that she has to attend the prize announcement ceremony.

After a while, Angad announces that Seerat has won the dance competition and now gets a diamond necklace.

Seerat and Santosh start dancing in excitement but eventually calm down when they realize that everyone is watching them.

Kiara and Gary are discussing how Seerat has magically won Angad's heart while Gary insinuates that he has something planned that will ruin Angad forever.

After the prize announcement, Angad takes Seerat to a table and asks her which drink she will take.

Angad keeps inquiring Seerat about her daily routine as he wants to know her better.

Seerat keeps throwing lies his way trying to get him impressed while Angad says that he likes independent and hardworking women like her and does not like the women who use their beauty as a tool to cut their way through life.

Santosh, who is eavesdropping on their entire conversation starts imagining Seerat's and Angad's wedding while Jasleen amusingly watches her.

Jasleen asks Santosh what is she thinking that is making her smile so much, and Santosh gives her a vague excuse.

Santosh also declines Ajeet's calls while telling Jasleen that the media is bothering her.

Meanwhile, Sahiba and Ajeet are getting worried as it is already 10 pm and Seerat and Santosh aren't home.

Ajeet decides that if they aren't home soon then they will go to the function themselves as Santosh isn't picking up the call.

Back at the Brar Mansion, Manveer is furiously looking at Angad and Seerat as they are spending time together.

She goes to Angad and tells him to meet all the guests of the party rather than sit at a place.

Angad tells Santosh that he will arrange a car to drop them home. Even though it is a dream come true for Santosh yet she denies the proposal as she knows if Angad sees their house then their whole act of the day will go in vain.

Keerat comes and says that the car cab has arrived at which Santosh quickly says that Angad doesn't have to worry as they will now go by the means of their own car.

When Angad and Manveer leave Santosh receives Ajeet's call and pretends to act like it is her driver Bablu.

Santosh and the others quickly get into the auto cab while Jasleen follows them and finds their truth.

Jasleen is very happy and says to herself that she will make sure this reality doesn't reveal itself in front of Angad till the very last moment.

© Copyright tellybest.com, 2022, 2023. All Rights Reserved. Unauthorized use and/or duplication of any material from tellybest.com without written permission is strictly prohibited.
Cached Saved on: Wednesday 25th of January 2023 09:47:09 AMCached Disp on: Monday 6th of February 2023 05:45:33 AM