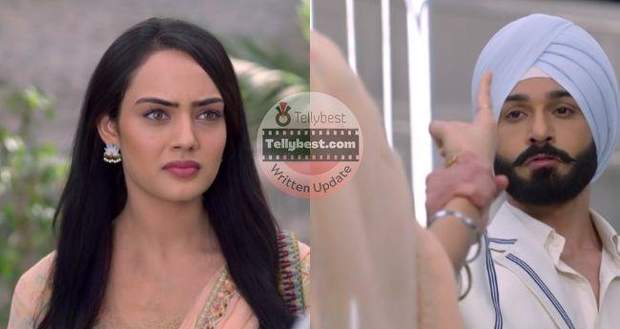 Today's Teri Meri Dooriyaan 19th January 2023 episode starts with Angad looking at the jhumka while he mumbles that in much less time, he has begun missing Seerat very much.

He hears laughter sound coming and when he opens the door, he finds Kiara, Garry, and Veer standing there with smiling faces.

After looking inside the office, Kiara mentions that no one was inside the room and not even the phone was turned on so with whom Angad was talking.

They tease Angad even more when he mentions that he forgot that he has already done his meeting with the associates.

Kiara tells everyone that the earring belongs to Seerat who has won Anagd’s heart too along with the competition after noticing Angad hiding the earring inside his pocket.

Even Garry mumbles that this time it is not about the deal but dil (heart) which makes Angad’s cheek turn red in shyness.

Meanwhile, at home, Sahiba tells Santosh that she is stressed about the earrings not because of herself but because she was saving them for Keerat’s studies.

Sahiba informs dadi that before her wedding she wants to dance at her sisters’ wedding while Ajeet sternly yells that if Santosh cared about Sahiba, she would not have let anyone insult her at the party.

Sahiba tries to defend Santosh but Santosh runs away from there in tears and Ajeet finds her lying on the floor.

Ajeet says that Santosh always says rude words to him while Santosh cryingly blames herself for being unfair to Sahiba.

Sahiba who is hearing their conversation feels upset for causing sadness to Santosh.

The next morning, Santosh finds Keerat walking with some wood and she remarks that Keerat never behaves like a woman.

Hugging Santosh from behind, Sahiba urges her to give her an oil massage while Santosh gets worried, thinking that she has heard her conversation.

While Santosh is hugging both her daughters, Seerat reminds Santosh that she has three daughters.

Santosh mocks Seerat for waking this early and even mentions that her clock must be slow.

After Sahiba and Keerat walk away, Santosh suggests to Seerat that she needs to go back to Brar’s mansion to try to win Angad’s heart.

Santosh and Seerat stop their happy discussion when other family members also arrive there.

Taiji tells Keerat that she needs to eat well to win the competition and Keerat adds that she will dedicate the medal to her.

Taiji tells Keerat that she will not be able to save it since Biji’s last memory is also gone now but Sahiba suggests that they will search the road while going to Brar's mansion and she is hopeful they will find it.

However, Seerat herself accepts that  the jhumka has fallen inside the Bara mansion which makes Keerat suspicious of her and Seerat also adds that she has not lost the Jhumka in the hope to go to the Brar mansion again.

While everyone looks at Seerat with confusion, Santosh controls the situation by adding that Seerat is elder so she will go to Brar mansion today to find the jhumka.

Meanwhile, in Brar's mansion, everyone gets surprised when Angad does not say no to marriage again and Veer urges Angad to reveal the name.

Just then, a servant gives Angad the jhumka which makes everyone smile wide as they think Angad has found someone.

© Copyright tellybest.com, 2022, 2023. All Rights Reserved. Unauthorized use and/or duplication of any material from tellybest.com without written permission is strictly prohibited.
Cached Saved on: Wednesday 25th of January 2023 09:52:31 AMCached Disp on: Thursday 9th of February 2023 05:44:23 AM