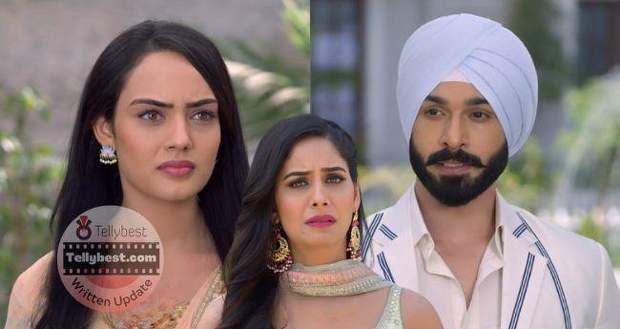 Manveer gets interested while Jasleen smiles to herself as she knows it must be Seerat's.

As everybody is gathered around the table to have breakfast, Kiara teases Angad that if she needs to wear a matching Jhumka for her outfit, she will first consult Angad.

Angad gets flustered while Veer also pokes fun at him.

Meanwhile, Sahiba gets stressed out when Kulche informs her that he couldn't find the Jhumka in the auto-rickshaw.

She dismisses him while Santosh asks Sahiba to take care of the bill for the milkman.

Sahiba gets quiet but tells Santosh she will pay for it.

Just then, Seerat appears all ready and announces that she is going to Brar Mansion to find her Jhumka.

Keerat doesn't like Seerat finding excuses to meet the so-called Brar's while Sahiba says she will also accompany Seerat.

However, Santosh intervenes and says Sahiba doesn't have to do everything.

Keerat asks Santosh if she is cooking something behind their back and Santosh gets exasperated.

She turns toward Keerat and asks her if she is the mother that Santosh has to tell her everything to.

Santosh asks Keerat to accompany Seerat but Keerat denies doing so since Brar's are poor at heart.

Seerat says she doesn't have time and leads her way to Brar Mansion all alone.

Meanwhile, Angad says that this Jhumka doesn't belong to him but to Seerat.

Gary enlightens Japjyot that Seerat is the girl who won the Giddha competition and might possibly Angad's heart also.

Manveer internally decides to investigate if Seerat would be a good match for Angad & for this house.

At Monga House, Keerat asks Sahiba to open her eyes and realize why Seerat is so excited to go to the Brar House.

She threatens to twist Seerat's elbows to have her spill the tea while Sahiba sees Seerat's phone lying on the bed.

She is worried that Angad might behave badly with Seerat or maybe label her as a thief.

On the other hand, Seerat appears at Brar Mansion and Angad's heart takes flight.

Gurleen, Jasleen, Veer, Gary, Kiara, Rabjyot and Japjyot, surrounds Angad who is told by Seerat that she came here to find her Jhumka.

Manveer gives it back to her while Japjyot finds Seerat very beautiful.

Outside, the security doesn't let Keerat and Sahiba enter while Keerat gets all ready to fight the lady security guard.

Sahiba intervenes and tells the security to let them in as her sister's Jhumka was lost at the party here.

Meanwhile, Seerat internally wishes that Angad stop her from leaving when Manveer does it.