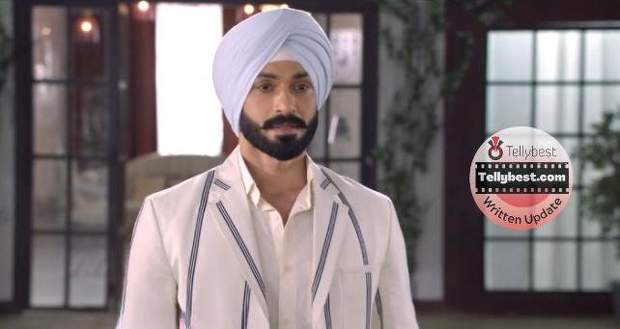 Today's Teri Meri Dooriyaan 21st January 2023 episode starts with Keerat snapping her fingers and getting ready to beat up the security guards standing outside Brar Mansion.

Sahiba scolds her that she is not here to fight while Keerat complains that yesterday she tolerated them due to Santosh and now due to Sahiba.

Keerat states that due to people like these (security guards), others get encouragement to insult others so easily.

Meanwhile, Seerat is preparing to leave when Manveer asks her to stop and have breakfast with them.

Jasleen pipes in and says even if Seerat stays till nighttime, it won't be a problem since she must have arrived with her driver.

Seerat nods and says that her drive will pick her up while Jasleen chuckles internally to see a fool like Seerat still pretending to be rich.

Outside, the female security guard ends up calling Sahiba "Fukrey" and Keerat gets so angry that she starts cursing them.

Sahiba gets concerned for Keerat as she runs away without telling her.

Inside, Angad and Seerat are able to hear the commotion outside and Seerat begins to worry since she recognizes these voices very well.

Angad asks Seerat to go back inside and have breakfast while he checks up on the entrance to what is happening.

Seerat follows Angad as he again gets mesmerized by her concern.

However, when Seerat sees Sahiba, she silently beckons her to go away but Angad sees Sahiba before she can run.

Angad shouts at her for trying to barge inside Brar Mansion and Sahiba gets angry at his disrespectful tone.

Meanwhile, Santosh gets worried when she hears a knock at her house, thinking that Seerat came early.

However, it is a Pir Baba who comes to ask for alms.

Santosh dismisses him but when he tells Santosh not to worry about her girls getting married into a rich household, Santosh gets awestruck and invites the saint inside.

She begins to ask him all kinds of questions regarding Seerat's marriage but the calm and placid saint tells Santosh that it will be Sahiba who will be changing their destinies.

Santosh gets happy and confused because Pir Baba says that Sahiba will be the richest.

She again asks about Seerat but the saint stands up and walks outside, telling Santosh that no matter how many times she asks about Seerat, she will have little trouble in getting married since destiny is prewritten.

Outside Brar Mansion, Sahiba rebukes Angad and asks him to talk nicely to an artist while Angad claims that Sahiba is here to steal.

After he sees her raise her finger at him, he twists her hand making Sahiba glance at Seerat.

Sahiba calls out to Seerat, asking her to say something.

Seerat gets anxious and asks Angad to go back while Angad is confused since Sahiba called Seerat "Didi".

Angad listens to Seerat and Seerat privately tells Sahiba to go away since Angad gets angry at her.

Sahiba gives Seerat her phone back while Manveer comes outside and gets suspicious to see Seerat and Sahiba talking with each other.

© Copyright tellybest.com, 2022, 2023. All Rights Reserved. Unauthorized use and/or duplication of any material from tellybest.com without written permission is strictly prohibited.
Cached Saved on: Wednesday 25th of January 2023 11:10:38 AMCached Disp on: Thursday 9th of February 2023 05:53:22 AM