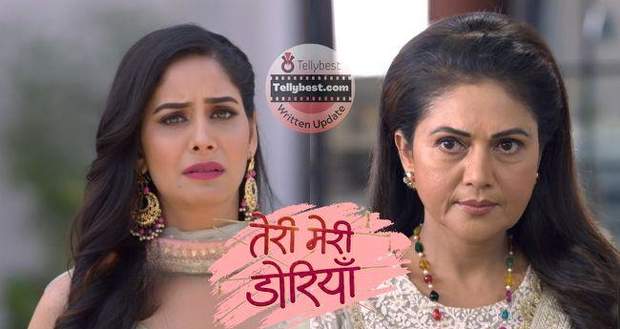 Today's Teri Meri Dooriyaan 22nd January 2023 episode starts with Seerat talking with Sahiba while Angad tells Manveer that Seerat will handle that girl by herself.

Sahiba asks Seerat if they got the earring as it is very important to her when Seerat places the earring on Sahiba’s hand.

Sahiba feels relieved seeing the earring and asks Seerat to come home with her as they found what they were searching for.

However, Seerat tells Sahiba to go home as she has some work here and will return later.

After Sahiba leaves, Manveer asks Seerat what she said to Sahiba which made her leave immediately.

Manveer asks Angad why Sahiba came to their house to which Angad replies that such people only come to the rich houses to make a scene and get money.

Seerat says that Sahiba came to apologize to the Brars for whatever she did the earlier day but Angad does not believe her.

Sahiba walks on the road mindlessly as she thinks about Seerat’s words and intentions.

Just then, Sahiba bumps into Keerat who stops her bike along with a group of men following her.

Keerat says that they are on their way to teach a lesson to the guard of the Brar family but Sahiba says that no one will go to that house anymore.

Sahiba shows Keerat the earring and says that Seerat found it for her so there is no need to go there anymore.

Keerat asks Sahiba where Seerat is to which Sahiba tells her that Seerat is still in the Brar mansion.

Meanwhile, Angad and Manveer bring Seerat inside with them and ask her to take her place at the dining table for lunch.

Seerat gets surprised to see so many dishes on the table and decides that she will eat everything with no hesitation.

As Seerat wonders what she should eat first, Angad thinks that the food is not to her liking and asks the staff to bring low-fat milk and cereals along with avocados.

Seerat remembers Sahiba’s words about the essence of Lohri food and says that she will eat that food only.

Angad and others get impressed with Seerat and begin their lunch together while Gary and Veer tease Angad for eating the traditional food.

Angad says that he wants to know Seerat more and asks her if she considers money more important than education.

Seerat tells about her family but does not say anything about her sisters due to the past record.

Seerat remembers an incident where Sahiba told her that both money and education are of equal importance as education is useless if one cannot earn money from it and look after their loved ones.

Angad likes Seerat’s honest answer and asks her what her passion or ambition is.

Seerat again recollects Sahiba’s words and says that she wants to improve herself every day so that the new her is an improved version of the past.

Gurleen says that Seerat is a perfect match for Angad while Seerat considers Angad a boring person in reality.

Gary decides to make Seerat his as he cannot let such a girl slip away from his hands.

Angad asks Seerat what she would choose between beauty and brains to which Seerat answers brains recalling Sahiba’s words.

Seerat thanks Sahiba in her heart for saving her while Angad feels that Seerat is the perfect girl for him.

© Copyright tellybest.com, 2022, 2023. All Rights Reserved. Unauthorized use and/or duplication of any material from tellybest.com without written permission is strictly prohibited.
Cached Saved on: Wednesday 25th of January 2023 09:17:24 AMCached Disp on: Sunday 5th of February 2023 04:13:23 AM