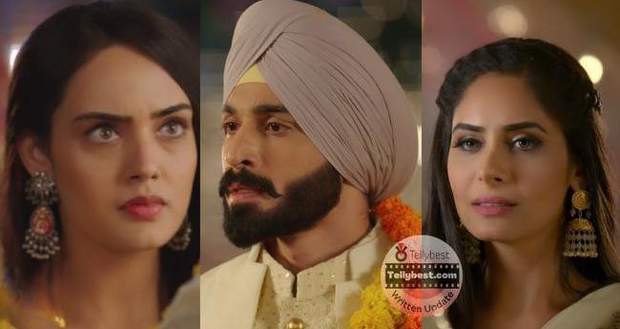 Seerat keeps quoting Sahiba in front of them, however, when Angad cross-questions her then Seerat goes blank.

She jogs her memory when Angad asks her views on happiness and tells Angad that happiness comes from family.

Manveer asks her about her father’s work to which Seerat lies that her father owns a big charity and international export business.

Jasleen thinks to herself happily that Seerat is putting on a great show by hiding her true personality and way of life.

Angad says that he has one last question from Seerat and that is if there is something that she wants to change in her life.

Seerat remembers the time when she was talking to Sahiba who told her that our past actions and incidents are the reason why we learn so much and grow.

Manveer says that she wants to meet Seerat’s mother and father to which Seerat says that she will inform her family about the meet-up as soon as she reaches home.

Angad excuses himself when he gets a phone call after which Garry says that he will give Angad’s number to Seerat.

Meanwhile, Santosh prays to Baba Ji that she wants the best for her daughters, specially Seerat.

Santosh continues to say that she loves all her daughters although she loves Seerat a little more and that is why she is so afraid that Guru Ji’s prophecy might come true.

Elsewhere, Sahiba and Keerat are decorating for a Lohri function.

Soon Keerat and Sahiba spot Angad entering the function who spots them back.

Sahiba asks Keerat to leave but the manager asks her to stay as the chief guest who is Angad has also arrived.

Meanwhile, Gary refuses to give Seerat Angad’s phone number by saying that Angad does not pick any one's phone calls, and instead he offers to give his own number.

Seerat thinks that she should at least take guava if not the mango.

Garry keeps taking credit for everything that Angad has done which makes Seerat wonder that all this time when she was after Angad, she should have been after Garry.

Back at the Lohri function, Angad gives a speech while Sahiba and Keerat watch him with weird angry looks.

Angad says that it is his deep-rooted wish that everyone who has ever loved must get the one they are in love with.

Sahiba wishes that her family remains happy and also that she becomes a big artist while Angad thinks about Seerat with his eyes closed.

Sahiba soon notices that a log of lighted wood is going to fall on Angad and she immediately runs his way to save him from it.

Sahiba pushes Angad out of the way but while saving him, a thali (plate) falls down from a woman’s hand and the sindoor from her plate fills Sahiba’s forehead.

© Copyright tellybest.com, 2022, 2023. All Rights Reserved. Unauthorized use and/or duplication of any material from tellybest.com without written permission is strictly prohibited.
Cached Saved on: Wednesday 25th of January 2023 10:36:14 AMCached Disp on: Sunday 5th of February 2023 02:57:25 AM