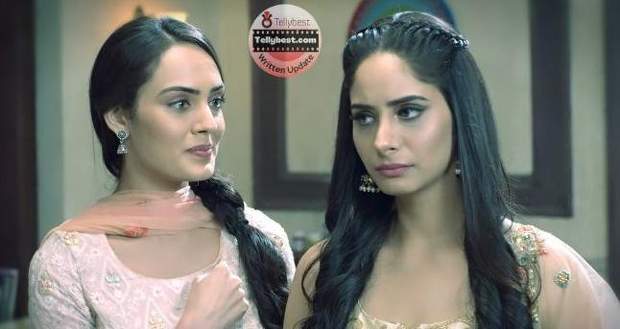 Today's Teri Meri Dooriyaan 24th January 2023 episode starts with Sahiba saving Angad from the log of lighted wood, however, in the hustle, Angad trips over a woman who was holding a plate of Sindoor.

The plate of Sindoor falls down and some of it falls on Sahiba’s forehead as she holds Angad’s hand.

Meanwhile, Kulwinder and Nimmi come to Santosh to wish her Lohri.

Santosh thinks that today she will teach these two a good lesson by boasting about how she went to a Brar party with her daughters.

Santosh tells them that Seerat won a diamond pendant in the Giddha competition, which is merely worth around 2-3 lakhs.

Nimmi and Kulwinder's eyes widen in amazement to which Santosh says that has she left the gas stove on as she smells something getting burnt.

Santosh then says that now she understands that the stove is not on but it is Kul and Nimmi who are burning in jealousy.

Santosh shows them a picture of Angad and Seerat together to which Nimmi says that she got the passes because Seerat was alone with Angad in his bed.

Santosh burns in anger and starts running toward Nimmi but Kulwider stops her.

Back at the Lohri function, Angad asks Sahiba how dare she touch him to which Sahiba says that she was trying to save him but now feels that she should have let him and his negativity burn.

Angad says that first, Sahiba needs to answer him and tell him how dare she touch him.

Sahiba pushes Angad a little again and says that she touched him like this and then asks him what is so peculiar about him that he cannot be touched as neither there are diamonds nor precious stones embedded on his body.

Sahiba continues to mimic Angad in a silly voice and quotes everything he said to her at that moment.

Angad asks Sahiba to stop acting like a lifesaver as he knows that it was Sahiba’s plan all along because she was the one after the decoration of the place.

Sahiba says that he is so rich that he could have bought anything like elephants or horses but instead he chooses to buy misconceptions.

Meanwhile, Garry flirts with Seerat and offers to drop her home as she is his guest and it is his responsibility.

On their way to Seerat’s house, Garry keeps trying to impress Seerat and then thinks to himself that how he has taken over Seerat's heart and has kicked Angad out of it.

Back at the Lohri function, Jaspal politely asks Sahiba to apologize to Angad to which Sahiba replies that if he can tell her the fault then she will apologize.

Angad asks Sahiba to prove her innocence, to which she says, she does not have the time to fulfill his whines.

The organizers tell Angad that Sahiba is a very good human being and has saved him from the fire.

Veer starts moving towards Sahiba and Angad to vouch for Sahiba but Keerat stops him and says that he should not stick his nose where it does not belong.

Sahiba then leaves along with Keerat and gets shocked to see sindoor in her head while heading out.