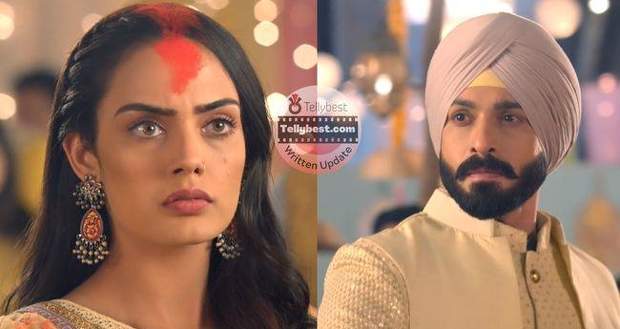 Today's Teri Meri Dooriyaan 25th January 2023 episode starts with Garry and Seerat in the car while he is dropping her home and keeps flirting with her which makes Seerat think that both the brothers are mad after her and want her.

Seerat then asks Garry to stop in front of a big bungalow that she claims to be hers.

They both bid each other goodbye after which Seerat thinks that Gary is full of charm and is more successful and smarter than Angad.

Meanwhile, Santosh has lost her temper when Nimmi crosses the line.

Santosh then says that she takes an oath that if she fails to marry Seerat into the Brar family then she will go to the Himalayan mountain and seek enlightenment.

Nimmi tells Ajeet and Santosh that it is impossible to get Seerat married into the Brar family.

Seerat enters at the same moment and says that Santosh and Seerat dream big, unlike Nimmi and Kulwinder whose dreams are like wishing for a free toothbrush along with the toothpaste.

Seerat then breaks the news that the Brar family has called Seerat’s parents to their mansion to ask for Seerat's hand.

Santosh starts dancing in front of Nimmi and Kulwinder and then goes and hugs Seerat.

Meanwhile, Angad asks Sahiba how dare she judge him without knowing anything about him because she is merely a girl from a small shop.

Sahiba says that she agrees that she owns a small shop but that is just her beginning and not her end.

She then says that Angad has business sense but what he lacks is common sense because it is not that common for him.

Sahiba asks Keerat to clean the sindoor off her head but the sindoor doesn’t come off and then they leave for their house.

Back at Santosh’s house, Nimmi says that she feels concerned about Santosh that in order to conquer all her dreams, she might lose control and cross the line.

Santosh has a hard time believing her ears when he refuses to go to the Brar house and says that she killed all her hopes and desires but will not let her daughters go through the same thing.

Ajeet says that he understands Santosh’s desires but she has to be realistic as well to which Santosh says what kind of a father he is and that he is killing her daughter's dreams with his own bare hands.

Ajeet says that he cannot take over a mother’s place but will fulfill a father’s responsibility because he is afraid that this marriage might backfire.

Seerat goes to Ajeet and says that all his life he has never done a single thing for her but now when she is trying to change her luck all by herself still Ajeet is not letting her do so.

Ajeet looks at Seerat with pain in his eyes and says Angad is a guy she met 2 days ago and is now insulting her father for his sake.