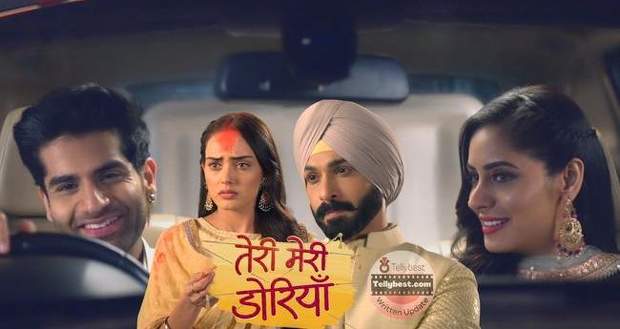 Today's Teri Meri Dooriyaan 26th January 2023 episode starts with Jasleen thinking to herself that how Angad’s love story will doom him as he's blinded by the love of pretentious Seerat.

Everyone starts teasing Angad about his cute little love story with Seerat however Angad is troubled by the thoughts of Sahiba.

Veer keeps singing wedding and love songs while walking along with Angad.

Angad asks him to either stop or else he will stuff a mic in Veer's mouth.

Meanwhile, Kulche is dropping Sahiba and Keerat home and asks Sahiba to ‘Chull’ when he sees that she is in a bad mood.

Keerat annoyingly corrects Kulche that it is ‘Chill’ and not ‘Chull’.

Back at the Mounga house, Seerat tells Ajeet that he is the biggest villain of her life to which Ajeet painfully replies that he knows he was unsuccessful in fulfilling her desires but he never left a stone untouched in getting her needs fulfilled.

Santosh throws all her clothes in front of Ajeet and asks him to pick one outfit that is in a good condition.

Santosh then starts crying manically and says that if only for her daughter’s happiness, she has to fake a little in front of others then she will do it no matter what.

The next day, Manveer and Jasleen are decorating the house because Seerat’s parents are coming to the house for Angad’s and Seerat’s wedding discussions.

Jasleen tells Inder that Angad’s going to get married to a girl named Seerat hearing which Inder gets furious at Manveer and others for not letting him know about his own son’s wedding discussions.

Akal says that if only Inder starts contributing a little to the family then only he will know what is going on under the roof they are living in together.

Manveer says that the girl Seerat is very good but first she needs the make sure that her background and her families are compatible too.

Akal says that Manveer is right because marriage is not a game of dolls but is a very serious topic otherwise it will end before getting started which is an indirect taunt on Jasleen.

Inder asks Angad if he consents to the marriage discussions going on in the family to which he replies that he will marry the girl only if his family approves of the girl because he is the eldest son of the family and wants to set a good example.

Garry thinks to himself that in this game of love, he will win and make Seerat his girlfriend.

Meanwhile, Sahiba enters the house with the sindoor in her head which makes Santosh and Ajeet very worried.

Santosh asks Sahiba, again and again, how did the sindoor land up in her head to which she finally replies that she is very angry and does not want to talk about it right now.

Ajeet fetches water for Sahiba and seats her comfortably.

Sahiba says that they do not need to worry as the sindoor plate accidentally fell down on her head.

Seerat says how weird it is that she is the one getting married however Sahiba comes home with sindoor in her head first.

© Copyright tellybest.com, 2022, 2023. All Rights Reserved. Unauthorized use and/or duplication of any material from tellybest.com without written permission is strictly prohibited.
Cached Saved on: Thursday 26th of January 2023 11:58:07 PMCached Disp on: Thursday 2nd of February 2023 08:54:47 PM