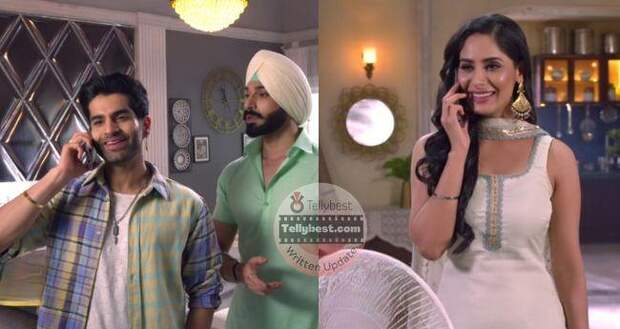 Today's Teri Meri Dooriyaan 28th January 2023 episode starts with Gary telling Seerat on the phone that he has planned a date for her and Angad on the condition that it remains Seerat’s treat.

Meanwhile, Angad asks Gary why did he ask Seerat to pay for the bill to which Gary says that girls nowadays want equality and that is why he did so.

Gary thinks to himself that he will make Angad look so bad in Seerat’s eyes that she will start falling for Garry.

Back at the Monga house, Seerat keeps insisting Sahiba saying that she only wants a mere amount of 10,000 rupees which is not a big deal to which Sahiba says that she does not have this much money.

Sahiba then finds out that Ajeet has left the money she gave him to keep in the locker outside.

She picks up the money and starts heading to the locker when Seerat takes it from her hands.

Sahiba worriedly asks Seerat to return her the money to which Seerat replies that Sahiba is a big fat liar and then says that she will not return the money and starts running away.

Sahiba runs after her, asking Seerat to return the money again and again after which Santosh intervenes.

Seerat smiles and says to Santosh that she will not return the money back to Sahiba but Sahiba keeps saying that the money is for Keerat’s college fees.

Sahiba goes to Seerat and asks her if she only thinks about herself and if she does not care about anyone else in the family.

Santosh says that she understands how important that money is for Sahiba but it is as important for Seerat because she will never get a chance to go on a date with Angad.

Santosh joins her hands in front of Sahiba which makes Sahiba helpless and she agrees with a heavy heart.

Meanwhile, Inder goes to Manveer and Angad and says that he wants to make sure Manveer does not bring home a girl like herself.

Angad asks both of them to stop throwing taunts at each other as they both are equally important to him.

Back at the Monga house, Sahiba says that she is very proud of Keerat as she also wanted to go to college but at that time, the circumstances were not supportive.

Sahiba then asks Keerat to keep an eye on Seerat while she is on a date because she does not trust Angad.

After some time, a big delivery comes for Santosh who has ordered things for Seerat’s wedding proposal in the Brar mansion.

Santosh then asks the delivery man to ask for the bill from Sahiba which makes Keerat very angry.

Meanwhile, Kiara shows Angad the wedding designs that she has prepared, however, Angad says that he has seen her past work.

Angad concludes that either the old designs were not Kiara's or the new ones were.

Kiara gets scared as she might get caught that she steals from other designers.

Angad says that the design is very average and if she continues to give him this kind of work, then she should better not give him any.

Meanwhile, the delivery man goes to Sahiba and asks for the bill of 8,000 rupees from her to which Sahiba replies that she needs a little extension.

© Copyright tellybest.com, 2022, 2023. All Rights Reserved. Unauthorized use and/or duplication of any material from tellybest.com without written permission is strictly prohibited.
Cached Saved on: Saturday 28th of January 2023 11:56:27 PMCached Disp on: Wednesday 1st of February 2023 10:23:57 PM