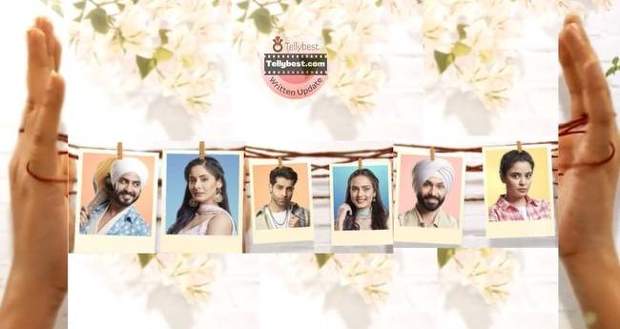 Today's Teri Meri Doriyaan 4th January 2023 episode starts with the narrator introducing the tale of Sahiba & Angad and referring to them as Sutlej and Beas river.

Both of them are shown as self-dependent people who deal with life in a straight line, and who do everything with love and care.

It is nighttime and both Sahiba and Angad sneak away from their houses.

Angad drives his car to an empty spot where a chopper comes to deliver a suitcase to him.

Meanwhile, Sahiba gets into a rickshaw and meets Sharma Ji who says he would have picked her up and praises the hard work she does for her family.

Sahiba speaks that a person without a family is like a parantha without a pickle and the focus is again shifted to Angad.

He drives back home and upon entering it, slips his feet on the wet floor.

He glares at the workers cleaning the floor while the lady who is doing the mopping sheepishly says that it is her fault.

Angad's wristwatch breaks while the male Sardarji says that they put up a caution signboard too.

Angad removes his watch and hands it to him, saying he always wears and desires perfect things in life and cannot wear the watch now.

He also advises the lady to never apologize for the work she does.

Angad says it is his fault since he didn't see the signage.

On the other hand, Santosh, AKA Sahiba's mother is introduced who has gone to fetch milk from a dairy with her two friends, Kulwinder and Nimmi.

There, Santosh eyes the owner of the dairy and gets attracted to the car he is driving.

She says a Sardar who has a luxurious car is a Gabru Sardar jokingly.

Santosh tries to small talk to him to see if he is suitable for Seerat (Santosh's elder daughter), but he dismisses her quickly.

Later, Santosh is informed by Kulwinder & Nimmi that the Brars are having a function today to celebrate Akal Singh Brar's 55th wedding anniversary.

Internally, Santosh dreams and wishes to see Seerat become the Brar's daughter-in-law and marry Angad, the eldest of the Brar's.

Jasleen tries to taunt Manveer & Angad that Angad's father, Inder, hasn't arrived for the pag (turban) tying competition and then calls Gary who is seen making out with a girl in his car.

However, after he receives a call from Jasleen, he gets ready to go to the house and apologizes to the girl he was having "fun" with by taking her wrong name.

Meanwhile, Santosh goes back home and gets into an argument with her husband Ajit, who is making food.

She says she has dreamt big for her girls' since he lost everything and has to depend on selling food in a stall.

Later, Sahiba pays the debt his father took from Sharma Ji & surprises him with the news.

Ajit gets emotional and says Sahiba is doing everything he should have done.

On the other hand, Santosh wakes up Seerat from her beauty sleep and applies raw milk with Kesar on her face.

She informs Seerat that she doesn't have to depend on matrimonial sites now and Seerat asks if she is going to marry Diljit Dosanjh.

Santosh informs her that they will go to attend a function at Brar's House, the biggest jeweler family in Ludhiana while Seerat gets excited and hugs Santosh.

© Copyright tellybest.com, 2022, 2023. All Rights Reserved. Unauthorized use and/or duplication of any material from tellybest.com without written permission is strictly prohibited.
Cached Saved on: Wednesday 25th of January 2023 01:20:23 PMCached Disp on: Tuesday 31st of January 2023 06:43:19 PM