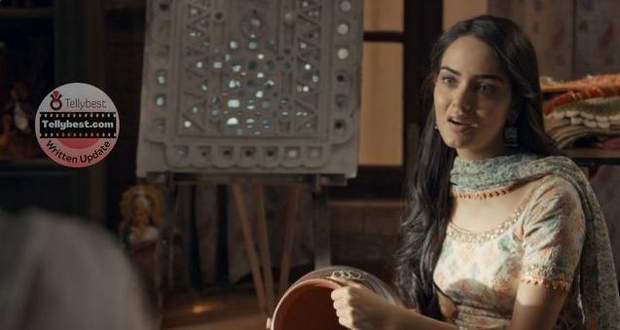 Today's Teri Meri Dooriyaan 5th January 2023 episode starts with Seerat getting excited and celebrating with Santosh if they get the passes to attend the function at the Brar's.

Santosh gets dreamier than Sirat as she envisions Seerat getting married to one of the boys of the Brar family.

Meanwhile, the pag competition starts and Daar Ji (Akal Singh Brar) asks Angad's help to stretch out the fabrics before he wraps it around his head as a turban.

Angad tells his Daar Ji that this is cheating but helps him out anyways.

After the pag competition is over, Jamjot, sees who has tied their pag perfectly.

She laughs at the way Veer has tied it while he says even though he lost the competition, her (Jamjot's) Nikkah (referring to himself) will be the next Mika.

Jamjot eyes her husband Akal Singh's pag but says this time, Angad has beaten him.

However, before Jamjot can hand over the winning amount, Jasleen tells that the portion behind Angad's pag is out and Akal Singh Brar wins.

Akal Singh Brar announces that Angad is the person who makes him proud even more than his father.

Hearing this Manveer gets tears in her eyes and Angad later tries to cheer her up.

Inside the house, Veer teases Angad by saying he saw how he took the last portion out of his pag to make Daar Ji win.

Angad widens his eyes in shock and asks Veer not to tell anyone because by making Daar Ji lose, he can never win.

Later, Jaspal (Angad's Uncle/Chachu, Veer's Father) appreciates the efforts done by Angad for the decorations he has done for the Guru Gobind Ji Path.

Angad shows him the imported diamond worth 25 crores he ordered from Belgium and Jaspal gets pleasantly surprised.

Meanwhile, Sahiba jokes about what is the point of going to Brar's House when the rich are happy amongst themselves.

Seerat tells Sahiba to open her eyes and says their house reminds her of black and white in today's world of VFX.

Sahiba corrects her by saying their house is made from traditional colors while Santosh cajoles her to do some jugad (short cut) and get the passes.

However, Seerat cries out and tells Santosh even if they get the passes, she doesn't have anything to wear.

Sahiba gives her the extra 2,500 cash she earned from Sharma Ji but Seerat asks her to keep it since with this little money, she cannot even buy a chunari.

Internally, Santosh says that sometimes it feels as if it is Sahiba who is the mother of this household.

On the other hand, Gary shows up and Jaspal mocks him by saying that the chief guest has arrived.

Angad shows the decorations done to Daar Ji for Sukhmani Sahib Paath but Daar Ji says it is too modern to pray to god.

Jasleen (Angad's aunt, Gary's mother) winks at Gary and sends him a picture of decoration, and announces that Angad has ruined Brar's reputation for a family gathering they have been doing for years.

She then asks Gary to show what he had in mind.

Angad breathes deeply and says since he is at fault, he will mend everything and goes to Tilaknagar to get traditional decoration.

Meanwhile, Sahiba also goes there to open her workshop but while walking, her clay pot falls out of her hand as Angad opens his car's door.

Sahiba looks at the owner of the car with disgust in his eyes as Angad steps out and removes his black sunglasses.

© Copyright tellybest.com, 2022, 2023. All Rights Reserved. Unauthorized use and/or duplication of any material from tellybest.com without written permission is strictly prohibited.
Cached Saved on: Wednesday 25th of January 2023 09:03:38 AMCached Disp on: Sunday 5th of February 2023 03:13:38 AM