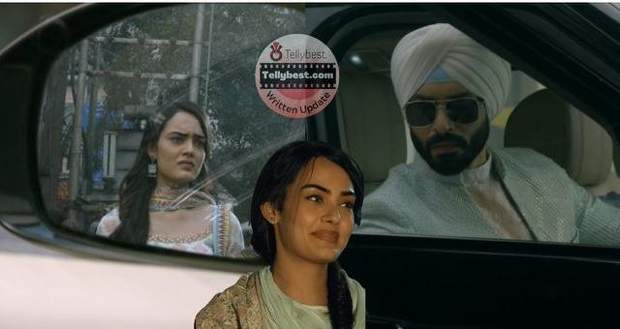 Today's Teri Meri Dooriyaan 6th January 2023 episode starts with Sahiba getting shocked to see her artwork fall to the ground by a stranger who emerges out of his car with attitude.

He hands her a note of five hundred rupees, making Sahiba even angrier.

Angad leaves there while Sahiba reels from the shock.

However, Veer apologizes on Angad's behalf but when he sees the broken artwork, he tells Sahiba that it is beautiful.

Sahiba doesn't get impressed by Veer's compliments and lets him know that she won't accept the rich people's fake drama as the first person had no value for art while the other is trying to handle the situation on his behalf.

Angad searches for the main gate of the Tilaknagar market when Sahiba corners him and asks him to say sorry to her for the loss she incurred.

Angad tells Sahiba that he has already given more than she deserves.

Sahiba clears his misconception and says to understand and value an art takes heart which he clearly doesn't have.

Veer hides his face behind Angad's back when things escalate and Sahiba forces him to say sorry and a few Sardar Ji come to back up Sahiba.

Veer tries to make Angad understand that if someone did the same thing with their sister, Kiara, how would Angad react?

Angad finally says sorry to Sahiba who is about to smash his car's headlights but stops.

She smiles and asks him to utter it loud and clear while Angad asks not to push her luck.

She puts the cash he gave to her back in his pocket while Sahiba says not everything can be done with the money.

Angad then smashes his car's headlight himself, trying to show everyone that he doesn't care about it and Sahiba labels him as Mr. ATM.

Meanwhile, Gary calls a media house and lets the person know that the evening function at Brar House will not happen today.

Jamjyot (Jasleen's mother, Daar Ji's wife) scolds her while Jassi goes to Daar Ji and fakes her concern for Angad.

Daar Ji tells Jasleen that mistakes are done by people who try while Jasleen gets angry and says she could have taken the family business' responsibility too if only Daar Ji had given her a chance.

Daar Ji further comments that Jasleen should only stick to taking care of her household which she cannot even do properly & asks Manveer (Angad's mother) to call Angad.

On the other hand, Veer comes in front of Sahiba's workshop and asks her if she can do traditional artwork.

Seeing Angad too, Sahiba jokes that meeting her became expensive for him.

She then playfully says Angad should say please first while Angad grips his phone tightly until Veer takes it away before Angad can break it just like the car.

Angad tells Veer that he doesn't want to take her help but Veer says please on Angad's behalf to Sahiba.

Just then, Sahiba gets a call from Santosh who says she hasn't been able to get the passes.

Veer continues, and tells Sahiba that they need her help to decorate Brar House for Paath, and hearing their surname, Sahiba remembers about the passes.

Angad pulls out a no-limit card and tells Sahiba she can swipe any amount of money for the work she will do but Sahiba lets them both know that she wants two passes for the evening function.

© Copyright tellybest.com, 2022, 2023. All Rights Reserved. Unauthorized use and/or duplication of any material from tellybest.com without written permission is strictly prohibited.
Cached Saved on: Wednesday 25th of January 2023 12:50:35 PMCached Disp on: Monday 6th of February 2023 05:07:35 AM