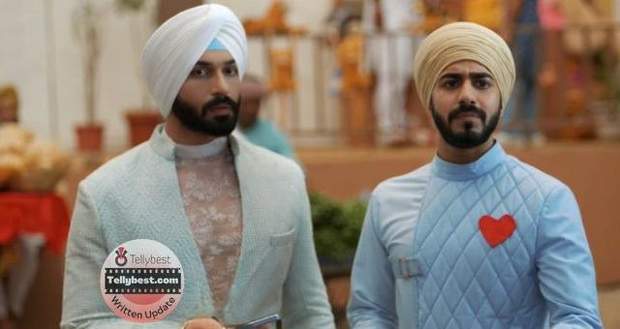 However, Sahiba wants them badly since Seerat and Santosh's spirit lies in those passes.

Veer looks at Angad pleadingly and tells him that they have no other option.

Sahiba further shows her Gabru-lady attitude and says if he is going to take her to Brar House for artwork, then why can't she attend the evening party too?

Meanwhile, everyone at Brar House awaits Angad's arrival but Inder, Angad's father, angrily says that Angad has become a racehorse who doesn't know what is right and wrong and just wants to be perfect in Daar Ji's eyes.

Manveer tries to support Angad but Jasleen takes the cue and says Gary could have done better.

On the other hand, Jamjyot tells Jaspal that she is worried about Angad letting down Daar Ji's reputation.

Just then, Jasleen pretends to talk to someone on the call, saying she doesn't see the Paath happening at their house now.

Jaspal asks her to be loud and clear because she is the type of person who would use any cash note for her work but will raise questions even if there is a single crease on a perfect note like Angad.

However, Jasleen scrunches her nose and tells Jaspal that he is only Angad's assistant.

Soon enough, Angad arrives with Sahiba who is stared at strangely by all the members of the Brar Family.

Jasleen questions Angad about his choice of bringing a girl who doesn't even look capable enough of delivering her work.

Manveer adds that she looks young while Sahiba says that if she looks too bad, she won't do their work then.

However, Angad asks her not to go since she agrees to work, and Veer tries to pacify the situation by praising Sahiba's traditional artwork.

Sahiba introduces her name and says she is not this girl or that girl as a person's creativity isn't judged by age or gender.

Kiara says that she thinks this girl is a gold digger but Akal Singh Brar gives Sahiba full freedom to use her creativity while Veer asks everyone to leave the hall.

Later, Daar Ji hears Jasleen's conversation with Gary who advises him to make use of the situation to his advantage.

Daar Ji catches Jasleen off-guard by his presence and then says he must enquire as to who leaked the family's crisis news to the media, making Gary sweat.

On the other hand, Angad tells Sahiba that it is her turn to make him believe that she is an artist or just a girl with a long & sharp tongue.

Veer is seen singing his song and playing the instruments while Sahiba prepares the artwork by painting the wall lovingly.

Meanwhile, Daar Ji emotionally tells Jamjyot that he feels bad since he hasn't been able to take her to the soil where she was born.

Jamjyot asks him not to worry since she is very happy with him.

© Copyright tellybest.com, 2022, 2023. All Rights Reserved. Unauthorized use and/or duplication of any material from tellybest.com without written permission is strictly prohibited.
Cached Saved on: Wednesday 25th of January 2023 10:01:28 AMCached Disp on: Tuesday 31st of January 2023 07:48:57 PM