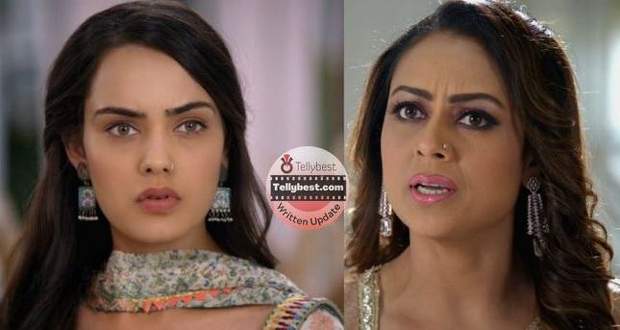 Today's Teri Meri Dooriyaan 8th January 2023 episode starts with Angad telling Jaspal that he wants the number of the editor who leaked the news to the media about the Paath and function not happening today.

Meanwhile, Sahiba carefully makes the flower cutouts from the clay and sticks them to the wall, immersing herself totally in the process.

On the other hand, Angad calls the editor and asks him to reveal the phone number of the person who said that the function at the Brar's will not happen.

The head editor ducks his head down in his office and lets Angad know that he cannot just reveal and betray his sources.

However, Angad has a better reply and he tells the editor, Aman Dhillon, that he would have appreciated him too only if the news were true.

He asks Aman to now publish a piece on the announcement, confirming the function at the Brar's.

Jaspal and Angad then call Rabjyot (Angad's Aunt) and asks her how far they are from the house.

Rabjyot excitedly video calls them, and says she is standing outside the Gurudwara as Hansraj (her husband) has gone to get Guru Maharaj (Guru Granth Sahib, the holy scripture of the Sikhs).

Angad gets anxious about the passing time and goes inside to check on Sahiba.

He asks her how much she is going to take as barely thirty minutes are left.

Sahiba tells him that he is disturbing her and then breaks a glass chandelier in front of Angad's face.

Angad gets angry & calls the clay dirty while Sahiba tells him to first get his fundamentals right and give proper respect to the clay as it is no dirt.

Just then, Kiara comes to question Sahiba and addresses her as Miss Attitude Queen.

However, Sahiba upon noticing that she is wearing heels inside the sacred room tells Kiara to get lost and not teach manners to others when she has none.

Scolding both of them like a mother, Sahiba makes Angad and Kiara leave.

Later, Gary messages Kiara to come to the poolside as Daar Ji is questioning everyone as to who leaked the inside news to the media.

Gary stiffens when Daar Ji asks to check the phones of the servants.

However, Jasleen forwards her phone too, saying all family members' phones should be checked as well.

She also shifts the blame to Inder but Jamjyot doesn't believe her.

As only five minutes are left, they all go to the hall to see Sahiba's artwork and Jamjyot says it is fine looking.

However, Daar Ji apologizes to Jamjyot as he gets let down and Angad scolds Sahiba for doing so much drama for a miserable-looking decoration.

Sahiba shuts everyone's mouth up by opening the shutters of the room and letting the sunlight fall on the mirrors as they reflect back the light.

Daar Ji's face lights up upon seeing Jamjyot's happiness and everyone gets in awe of Sahiba's work.

Sahiba tells Angad that it is not a good habit to judge someone or their work too quickly.

Jasleen intervenes and says it is a matter of fate that Angad got saved and this girl did good work accidentally.

However, Manveer gives her a sharp reply, saying good things happen with people who try as Angad is the one who brought Sahiba.

Sahiba gets irritated by their banter but smiles when Veer appreciates his work along with Daar Ji who blesses Sahiba.

Jamjyot gets emotional as she says it reminds her of her house in Multan.

Angad pretends not to be impressed by Sahiba's work and says it is alright.

Sahiba taunts him by saying the person who is a jeweler by profession doesn't have the right perception as beauty lies in the eyes of the beholder and her work is a 'Noor' as quoted by Daar ji.