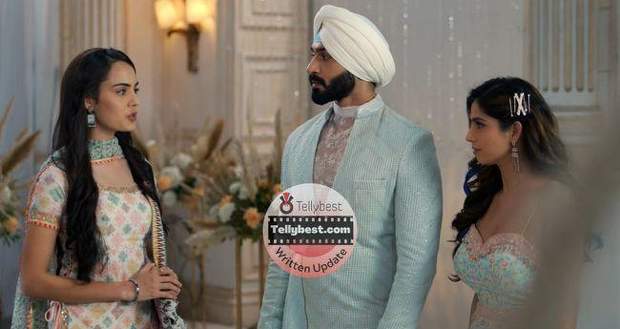 Today's Teri Meri Dooriyaan 9th January 2023 episode starts with Angad's aunt asking Sahiba where did she learn this art from.

Sahiba says she didn't learn it anywhere but got the skill from her father who is also an artist.

Gary who is standing beside Angad tells him that Sahiba is acting as if she has taken over the world as she is flying in the air.

Sahiba takes a jibe at him and says she knew he wouldn't praise her but expected a little respect from him towards the art.

Angad takes out a hefty amount of cash from his pockets and hands it to Sahiba.

Sahiba scrunches her nose and gives the cash right back in his hand, stating she didn't do this work for money but for the love of God.

Just then, the people carrying Guru Maharaj arrive at Brar Mansion, and the excitement doubles amongst the family members.

Daar Ji holds the holy scripture in his hand and carries it carefully inside the decorated room along with Angad who glares at Sahiba from the corner of his eye.

Everybody sits down in the hall and Manveer's friend compliment the setting done for the Paath.

The ladies cover their heads with the dupattas and sit on crossed legs, closing their eyes in silent prayer.

Sahiba also attends the Paath and later taunts Angad when he pauses to give her prasad.

She tells him that she will not return it like his cash and he drops the prasad in her hand.

Sirat scolds Keerat who then replies dirt is only good for Sirat's glowing skin jokingly.

Santosh gets angry and kicks Keerat's mattress, asking her to speak something good once in a while.

Santosh complains to the girls' taiji, saying she is worried about the passes.

However, Taiji advises Santosh to drop the dream of going to the Brar House.

Santosh promises to eat one less roti (chapatti) a day if they get the passes and suddenly, somebody rings the bell of the Monga house.

Santosh celebrates with Seerat when she sees the passes in the courier man's hand but Keerat curiously thinks about who could have done this.

On the other hand, Daar Ji praises Angad one more time for finding a girl like Sahiba who did amazing work in a short amount of time.

Angad doesn't praise Sahiba much and says she did an okay job.

Jasleen's blood boils to hear Angad receiving so many compliments and she swats Gary's back.

Gary eyes her strangely while she says she only receives complaints about him, whereas Angad gets showered in compliments.

This doesn't faze Gary as he tells his mother to chill since he has swag which Angad doesn't.

Meanwhile, Angad finally gets the number from the editor of the person who leaked the news.

Gary hears this and worries for himself while the servant with whose phone Gary called picks up Angad's call.

Angad hurriedly descends, shouting at the other person to reveal his identity but Angad, unfortunately, bumps into Sahiba.

Sahiba's pink color accidentally splashes on Angad's sherwani while Kiara scolds Sahiba for not knowing the price of such an expensive item.

Sahiba jokes that she didn't know she arrived in a showroom and not Brar Mansion.

Kiara shames Sahiba for being poor and getting a big break from the Brar's.

However, Sahiba gives it back to her, saying the people she calls poor have a tough life to face, unlike her who is busy on phone all day.

Kiara grits her teeth as Sahiba berates her, saying she should have shown this attitude before the work was done.

However, Angad shouts at Sahiba to get out and he breathes a sigh of relief when she does.

As Sahiba is leaving, two Sardar Ji's (staff at Brar Mansion) compliments her for her art and then later ask her if she made the clay pots too.

Sahiba notices that Angad is listening to her from a distance and says that some arrogant, rich person broke it without even apologizing for it properly.

© Copyright tellybest.com, 2022, 2023. All Rights Reserved. Unauthorized use and/or duplication of any material from tellybest.com without written permission is strictly prohibited.
Cached Saved on: Wednesday 25th of January 2023 04:54:11 PMCached Disp on: Wednesday 1st of February 2023 05:42:28 PM