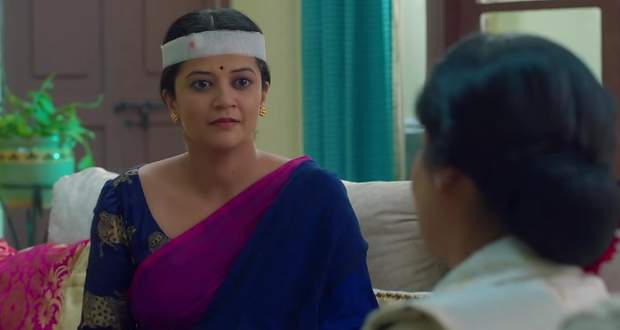 Meanwhile, Veena Devi tells Purab that she has found the bangle girl and leaves.

Hansika overhears her and leaves crying as Purab looks on while Taiji thinks to follow Veena Devito to find out who the bangle girl is but gets stopped by her daughter-in-law.

Thapki comes to the hospital and sees Sudha scolding Arjun and asking for the bangles while Thapki says that the bangles didn't belong to her.

Sudha gets angry and rebukes her while telling them to not come until she arranges the ration and rent to come inside the house.

Purvi looks for a job and leaves from there while Arjun takes care of Thapki's mother.

Thapki comes to the company for a job while the employer informs her that she will have to go from house to house and sell products and tells her to convince him to buy the oil while removing his wig.

Thapki manages to convince the employer and he gives her a packet of biodegradable bags and tells her to sell one packet to get the job.

Thapki goes from house to house but the people shut the door on her due to her stuttering and one maid insults her and pushes her.

However, Hansika's father picks her up and scolds the maid after which he buys the bags from her.

Veena Devi comes to Thapki's house and tells her mother that she would like to get her son married to Thapki while Sudha gets angry seeing them from afar.

Mamaji is about to talk about Thapki's stuttering but Veena stops him saying that everyone has imperfections.

Later, Veena requests to meet Thapki while Thapki comes there with mud on her face.