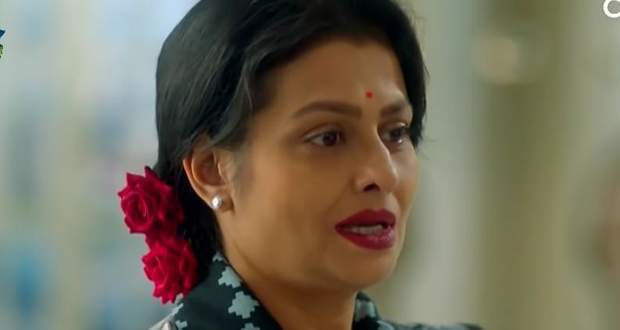 Today's Thapki Pyaar Ki 2 12 October 2021 episode starts with Thapki getting shocked seeing Veena Devi in her house while Sudha gets happy and Taiji reaches there.

However, Veena Devi walks towards Thapki and wipes her face after dipping her handkerchief in water, and then praises her beauty.

She is about to make her wear the bangle but gets a call and leaves while Taiji thinks to get her married to Armaan and calls Sagar who informs her that the minister is already waiting for her in the office.

Thapki tells the family that she is not happy with the alliance while Veena Devi asks Dadi if she hurried in fixing the alliance and palms to inform Purab in her way.

Thapki says that she won't leave her mother alone while Mamaji tries to convince her when Sudha scolds him after which Thapki gives her money saying that she has gotten a job and will contribute to the house.

Sudha eyes the bangles and is about to take them but Arjun takes them before her.

Elsewhere, Veena Devi rooms in the kitchen saying that she will make food for Purab and will inform him about the alliance while Dadi gets emotional seeing her in the kitchen.

He sees Thapki seeing bags and asks her to sell him one but she refused after which he dials the number on the bag and complaints to the owner.

Thapki gets scolded by her employer and reluctantly sells all the bags to Puran who used only one and throws the remaining bags in the garbage.

Thapki gets angry seeing that and scolds him while he looks on.