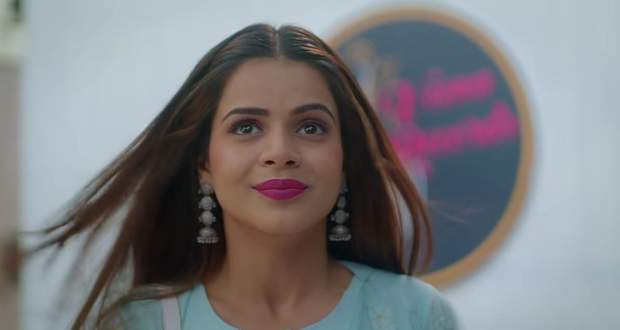 Today's Thapki Pyaar Ki 2 6 October 2021 episode starts with Thapki coming to the studio and standing in line while Purab tells his people to keep a shed for the people outside in line and give them refreshments hearing Thapki say that she is thirsty.

Meanwhile, Purab calls Handika and asks her for sample but she tells him that she has given her CD to the girl in blue dress named Tanya and Purab tells the employee to get the CD from that girl.

However, the staff mistakes Thapki as Tanya and takes her inside while she gets happy thinking thag her sample will be heard by Veena Devi herself.

Elsewhere, Preeti talks to Mamji and finds out that Thapki went to Veena Records while Shudha smirks forming a plan.

Veena Devi tells her assistant to cancel today',a event saying that her throat got bad sight and that she needs to purify it.

Thapki is leaving the office when she is about to fall but Rishi saves her and scolds her for ruining his watch.

Further, he misunderstands the situation and thinks that Thapki lied to the staff to give her CD to Veena Devi and gets tensed hearing her stammer.

He leaves to stop Veena from hearing the CD but Veena hears the recording of Thapki introducing herself while dtammering and throws the CD without hearing her sing.

Veena leaves while Purab also leaves in his car and tells the guards to throw Thapki out of there.

Elsewhere, Sharda destroys the picture of Veena Devi and the picture flies to the road and Thapki's mother goes to pick it when she gets hit by a car in front of Thapki's eyes.

They take her to the hospital where the doctor tells them that they need to deposit fifty thousand for the surgery making them tensed.