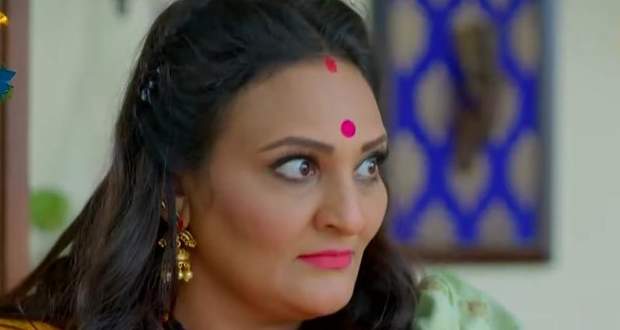 Today's Thapki Pyaar Ki 2 8 October 2021 episode starts with Thapki colliding with Purab and his watch breaking while she tells him that we will return his money and leaves while he calls her Nuksaan Devi.

Meanwhile, Veena informs Dadi that she found the heir of her music company and shows her empty hands while Taiji wonders to whom she has given her bangles.

Meanwhile, Purab meets Hansika and tells her that Veena has promised to hear her sample.

Elsewhere, Thapki and Arjun decide to give the money she has to the hospital for charitable and she leaves to see her money while Sudha comes there snatches the bangles.

Veena tells her assistant to give an advertisement in the newspaper for the girl sitting in the veil who was singing in the temple and goes to practice.

The chef puts gas on the stove and it whistles while Veena comes downstairs and scolds him for creating hindrance in her practice.

Sudha and Preeti see the advertisement in the newspaper and realize that it is for Thapki while Arjun steals the bangles and gives them to Thapki.

However, Thapki notices the VD initials on it and searches on the internet after which she finds out that they are of Veena Devi.

Hansika informs Purab about the ad and he questions Veena about it while Thapki and Mamaji reach Veena Records.

However, they see the crowd ans think to come the next day when Mamaji sees the audition signboard and encourages Thapki to sign up.

© Copyright tellybest.com, 2020, 2021. All Rights Reserved. Unauthorized use and/or duplication of any material from tellybest.com without written permission is strictly prohibited.
Cached Saved on: Friday 21st of January 2022 04:27:18 PM