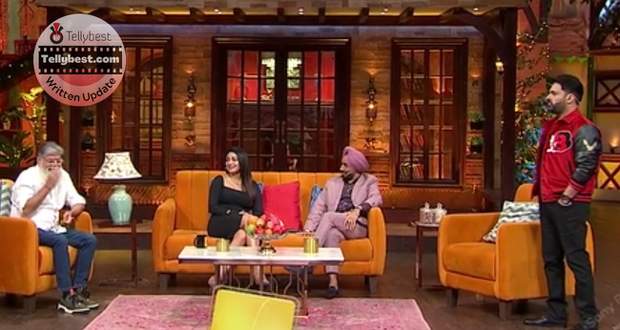 This week's guests are famous Punjabi actors Anirudh, Neeru Bajwa, and Satinder Sartaaj who will grace the stage of the Kapil Sharma Show to promote their next movie KaliJotta.

The recent promos of The Kapil Sharma Show for this weekend (21 January 2023) show Kapil welcoming the guest to the stage with applause.

Gudiya cracks jokes about Neeru belonging to the same village in Bihar as he.

On being asked to clarify, she cites examples like Shekharwa, Rameshwa and similarly Bajwa.

One of the other promos of, The Kapil Sharma Show (21-01-2023) showcases Kapil asking Anirudh how he managed to convince Satinder to do the movie, did the script fascinated him or Neeru's picture.

Later, Rani also cracks a joke about changing her clothes if she is assumed to be alone on the stage.

The wonderful performance of the actors and their comic timing tickles the audience pink with laughter.

© Copyright tellybest.com, 2022, 2023. All Rights Reserved. Unauthorized use and/or duplication of any material from tellybest.com without written permission is strictly prohibited.
Cached Saved on: Wednesday 25th of January 2023 09:06:31 AMCached Disp on: Tuesday 31st of January 2023 06:57:43 PM