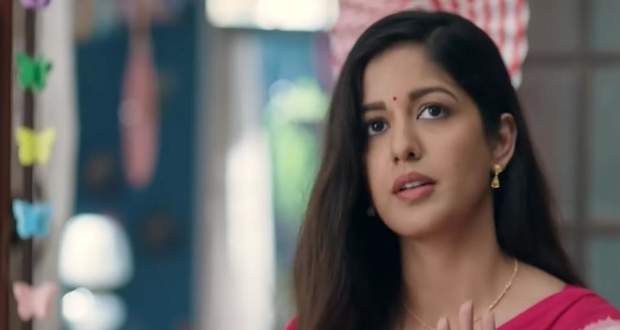 Further, Arjun's mother tells Kajol to sing and compliments Naina while Shreya tells Kajol that she should sing Bhajan in front of elders.

Pishimaa tells them to have sweets and Amrita gives Kajol the Shagun stuff.

Shreya takes Arjun aside and flirts with him while Kajol heard her voices and gets sure that it was her who had called her in the morning.

Later, Kajol and Shreya are in her room as Shreya asks her to give good measured outfit and a bangle for measurements.

Kajol gives her the items while Shreya asks her what happened between her and Arjun.

Elsewhere, Naina informs Arjun about the phone call and flirts with him.

Shreya keeps questioning Kajol and asks her if she knows about Arjun's many affairs making Kajol think if she should ask her about the phone call or not.

Shreya then changes topic and asks her if she had any boyfriends but Kajol refuses.

Kajol tells Shreya that they don't do such things while Shreya boasts about Arjun.

Kajol asks her how she knows such things.

Meanwhile, Arjun's father talks about dowry with Kajol's family and tell them that they should give shagun to 125 guests and they agree.

Arjun's father tells Kajol's family that they should gift a sports car to Arjun making them tensed.

Shreya further tries to intimedate Kajol saying that Arjun is far much better for her when Kajol answers back saying that he is the one who proposed to her.

© Copyright tellybest.com, 2020, 2021. All Rights Reserved. Unauthorized use and/or duplication of any material from tellybest.com without written permission is strictly prohibited.
Cached Saved on: Thursday 27th of January 2022 02:59:50 PM