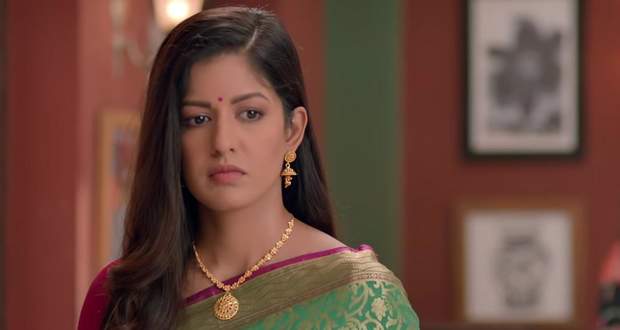 He requests them to not reveal it to Kajol and they stay for the cake cutting.

Elsewhere, Shreya tries to instigate Kajol while Arjun comes there with Apu.

Shreya mocks Kajol while Kajol says that she is innocent but not helpless and apologies if she felt bad.

Shreya leaves telling her to not badmouth her to Arjun.

Arjun asks Kajol about the phone call and tells her that they are just jealous of her while she reveals to him that she thinks it's someone familiar.

Meanwhile, Shreya goes to the elders and tells them that Kajol stayed back with Arjun even after she told her to come and badmouths her.

Arjun gets on his knees and shows the ring to Kajol and makes her wear it while his family taunts Kajol's family.

Shreya tells the family that she will bring them downstairs and gets shocked to see them about to kiss.

She shouts at Kajol and tells them to come downstairs.

Arjun's mother gifts Kajol necklace while Shreya gives her bangles and tells her that she always goes out with Arjun on her birthday.

Naina, Anu, and Chandrika notice the ring and praise it while Shreya shows her pendant and says that she wears it always as Arjun had gifted it to her.

Arjun's family leaves except him and Shreya while everyone plays games.

Kajol goes to bring something for Shreya while Shreya argues with Arjun.

However, he tells her that he is cleaning up the mess she made and says that no one will suspect them if he gets married to Kajol.