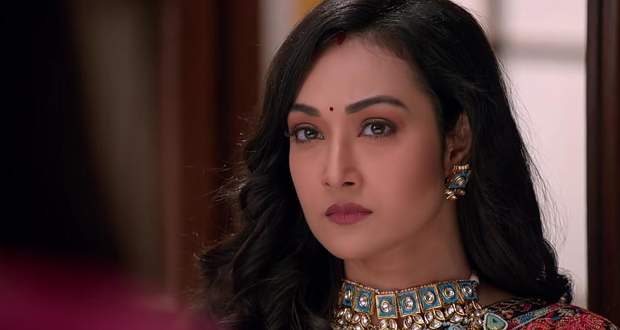 However, Shreya tells Kajol to see and learn from her and goes to dance with Arjun.

Later, Naina warns Kajol about Shreya while Arjun makes Kajol dance with him on a slow song as she doesn't know dancing making Shreya jealous.

Shreya further mocks while her siblings stand up for her.

During the car ride home, Amrita praises Kajol and tells Shreya to be careful as her true face might come out.

In her room, Shreya feels angry at Kajol while Arjun comes there and tells her that he acted with Kajol so that no one doubts on her.

Further, she consoles her and gets romantic with her while Kajol thinks why Shreya was possessive about Arjun.

However, Kajol calls Arjun and Shreya picks the call saying that she shouldn't call this late.

Kajol retorts that she also shouldn't pick up her brother-in-law's phone at this time and informs that Arjun forgot his wallet there.

She cuts the thinks that Arjun can't cheat her while Arjun calms Shreya saying that they will hated if the  news about their affair got out.

Kajol goes to her father and cries into his shoulder telling him to cancel the wedding while thinking of being doubtful on Arjun.

Arjun calls her just then and makes up a lie which she believes.

The next day, Naina tells Baba that she needs 1 lakh to enroll in acting course but he refuses saying that he is more focused on Kajol's marriage and talks about the luxury car.

However, Kajol overhears them and tells Baba that he will not give the car to them.