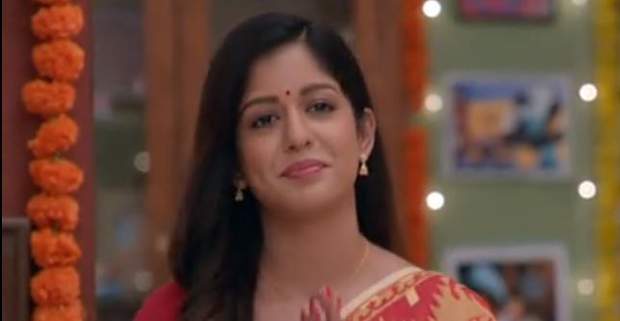 Today's Thoda Sa Baadal Thoda Sa Paani 2 September 2021 episode starts with Arjun trying to convince Kajol that elders should handle their issues themselves. He promises that he'll request his father to have a conversation with Kajol's father.

Later, while returning home, Kajol sees her father doing a test drive for a car and realizes that her father is going to buy the car demanded by Arjun's father.

Meanwhile, everyone at Kajol's house is preparing for the Haldi ritual. At the same time, Shreya arrives there and finds out that Kajol is not at home. Shreya taunts her family and asks whether Kajol will stay at home after the marriage or not.

Kajol comes back and greets Shreya. Shreya asks Kajol where was she all this time. Kajol tells her that she went to the temple.

On the other hand, Kajol's father goes to meet someone to request a loan. The man asks for his company's documents and agrees to give him a loan the next day.

Meanwhile, at Arjun's house, Shreya tells everyone that Kajol was missing from her own ritual. Shreya exaggerates and tells that Kajol refused to answer where she was and whom she went to meet.

Later, Polti comes to defend Kajol. So, Shreya tells everyone that Polti takes Kajol's side because she likes Kajol's brother Apu.

Further, Arjun comes back from the office. Shreya realizes that Arjun went to meet Kajol and they both had the same kumkum tika on them.