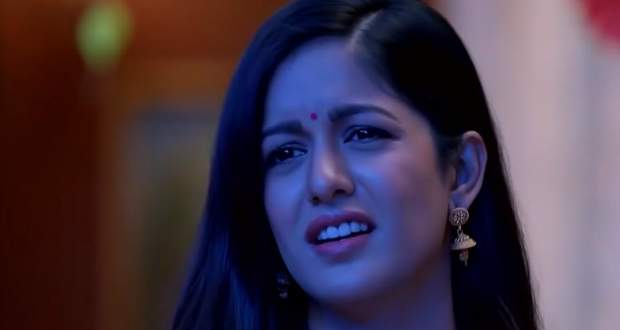 Today's Thoda Sa Baadal Thoda Sa Paani 31 August 2021 episode starts with Kajol thinking that Arjun lied to her and being distant as her siblings talk to her.

Arjun forgets his phone which rings and Kajol hears it.

Naina says that she will give the phone to the manager while Kajol fears her seeing Arjun.

Anu notices Arjun and calls him to their table while he lies to them that he has came there with foreign delegates for a meeting and will see them later.

He offers to pay their bill but Kajol refuses saying that Baba gave them money for it.

Meanwhile, Baba goes to someone for loan but he refuses saying that he needs to pay his old debts first.

Arjun comes outside and lies to Shreya that he met foreign delegates inside.

Kajol and her siblings come home while Pishimaa and Chachi get emotional seeing Kajol.

Meanwhile, Baba is about to get hit by a car thinking that he didn't get the loan but gets saved.

He comes home and Kajol asks him if he talked to Arjun's father about the car but he tells her that he will handle and to not discuss it anymore.

Arjun calls Kajol and tells her that he couldn't meet her due to meeting while she tells him that she saw h at the restaurant with Shreya.

He again lies to her that he met her there and she gave him the shopping list given by his mother and she believes him.

She tells him to meet her tomorrow at the temple and he agreed while trying to lighten the situation.

However, she disconnects without any interaction making Arjun think about her behaving abnormal.

© Copyright tellybest.com, 2020, 2021. All Rights Reserved. Unauthorized use and/or duplication of any material from tellybest.com without written permission is strictly prohibited.
Cached Saved on: Monday 1st of August 2022 07:33:00 AMCached Disp on: Wednesday 17th of August 2022 03:16:05 PM