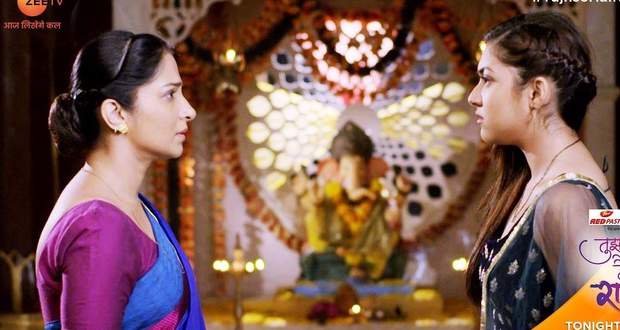 Today's Tujhse Hai Raabta 1 Apr episode starts with Aau Saheb. The Sarpanch arrives to apologize Anupriya and Aau Saheb for the temple incident. He invites Aau Saheb as the chief guest for some ceremony.

Aau Saheb offers her place for utilizing it for the ceremony. Sampada intervenes and revokes Aau Saheb’s offer. Atharva walks in and asks the Sarpanch to follow Aau Saheb’s instructions.

A flashback reveals that Anupriya had evidence against Atharva and she has utilized the same to crack a deal with Atharva. As per the terms of the deal, Atharva will never trouble Aau Saheb and in return, she will never pass on the document.

Meanwhile, Malhar is trying to look for evidence against Keshav, but ending up in vain. He has understood that someone is trying to protect Keshav.

Kalyani gets the opportunity to talk to Anupriya. She asks about Keshav’s story. Anupriya tells Kalyani about Keshav’s case. She also revealed her plan to control Atharva. Anupriya hands over the homemade diapers to Kalyani and leaves.

Malhar finds a camera in the diapers. He assumes it as Kalyani’s ploy.

© Copyright tellybest.com, 2020, 2021. All Rights Reserved. Unauthorized use and/or duplication of any material from tellybest.com without written permission is strictly prohibited.
Cached Saved on: Monday 6th of December 2021 04:22:05 PM