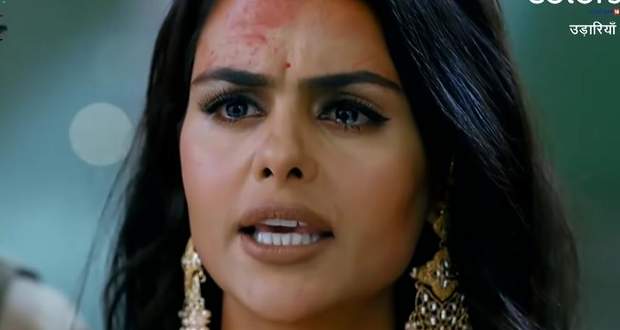 Today's Udaariyaan 11 September 2021 episode starts with Khushbeer getting angry at Fateh for bringing back Jasmine to his house. He asks him to take her and go somewhere else as he doesn't want to see their faces in his house.

Further, Khushbeer closes the door when Gurpreet stops him. She says if Fateh leaves this house she will go with him. Khushbeer tells her that Fateh has cheated upon his wife, he has made his family ashamed, if she thinks that Fateh is still right then she can go with him. Biji gets upset listening to this and falls unconscious.

On the other hand, Tejo's father tells Tejo to fight for her rights.

At Fateh's house, the doctor tells them that Biji has suffered a heart attack and another attack may be fatal for her.

The next day, Biji gets up and tells everyone that she wants Tejo back in the house or else she is not going to eat anything.

Meanwhile, Maahi calls Tejo and informs her about everything.

Further, Fateh tries to convince Biji to have food but she refuses. Everyone is praying to Lord Ganesha for Tejo's return.

Suddenly, Tejo walks in from the door and comes to meet Biji. Biji gets very pleased seeing Tejo and eats as Tejo feeds her.

Later, Khushbeer tells Tejo that she will stay in that house as a daughter from now onwards.

© Copyright tellybest.com, 2020, 2021. All Rights Reserved. Unauthorized use and/or duplication of any material from tellybest.com without written permission is strictly prohibited.
Cached Saved on: Tuesday 2nd of August 2022 06:22:13 AMCached Disp on: Wednesday 17th of August 2022 04:59:55 PM